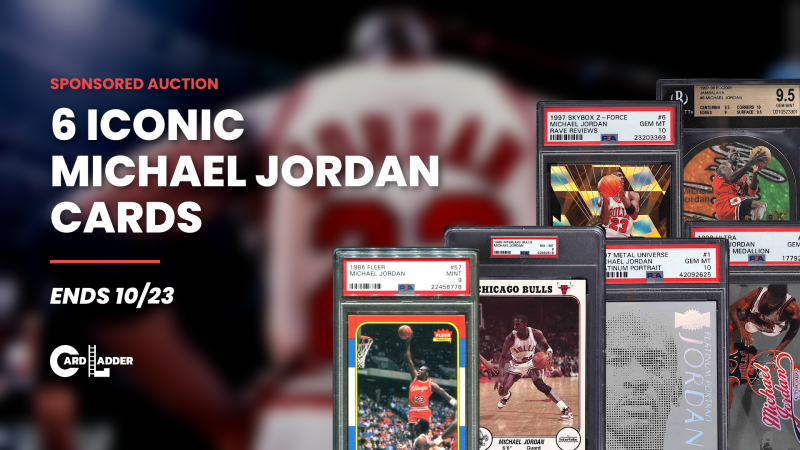 This blog is an advertisement paid for by the current owner of the cards mentioned within.

In this month’s PWCC Premier Auction, you can add some of the rarest and most iconic Jordan rookies and 1990s inserts with high grades. The six-time champion has established himself as an iconic figure on and off the court. With the rise of popularity in Jordan inserts, these are a must-have for any Jordan collector.

Sign up for PWCC today to bid on the following cards. The auction ends on October 23:

The Jambalaya insert has become a collector's favorite over the last 20 years, and the demand for them reflects that. With many renditions over the years from 1997-2006, the first year is what you want. Created by Arena Design, this set is exclusive to the top stars of the league. Paying homage to the classic Louisiana dish, this set has a beautiful contrast of colors in addition to the gold foil. Since this set is known for condition issues, this card is a rarity with 9 edges, 10 corners, and a 9.5 surface. At just pop 42, there is only one graded higher with none selling in the last year. This card is a true collector's item which is why you do not see these pop up often for sale.

1997 Metal Universe has established itself as one of the most iconic sports card products in history. One of the most notable and rare inserts from this product is the Platinum Portraits. Despite not being numbered, the pack odds were 1:4,320 across a 15 card set that made the Jordan all the more desirable. Jordan’s face on this card was created by a series of tiny holes lasered, which caused these cards to be extremely condition-sensitive. As a result, over the last 24 years, only 17 have received the highly sought-after PSA 10 Gem Mint.

This is a gorgeous card -- a beautiful Jordan 1990s insert with a gold chromium foil refractor finish. Despite not being numbered, the pack odds of 1:3,456 packs allude to this set's rarity. The foil surface can be extremely condition-sensitive, which is why only 17 copies have received the PSA 10 grade. This is not a card that you see frequently or on eBay, so when you see it you have to act fast. The demand for this card is at an all-time high and the market reflects this.

This 1985 Interlake Bulls Jordan card is one of Jordan’s very first rookie cards. The card predates the 1986 Fleer many know as Jordan’s premier rookie card. With his tongue out and iconic shoes in focus, the photography of this card offers some of Jordan’s most iconic traits. With a population of 45 and only 39 graded higher, this card is a truly rare must-have item for Jordan collectors.

This card has so many things going for it. Not only is it one of Jordan’s first numbered cards, but it is also from an iconic set with a beautiful photograph. The silver foil pops on this card in contrast with the grey background. Despite being condition sensitive, this card has no chipping and corner issues, which landed it the sought-after PSA 10 grade. With a pop report of just 5, this is a card you cannot hesitate on as you will not see another. The photograph is not only beautiful but also pays homage to a historical performance in Madison Square Garden scoring 42 points.

A card that needs no introduction but needs to be in every basketball collector's collection -- the iconic 1986 Fleer Jordan rookie. PWCC describes this card as “The offered specimen displays pack fresh qualities with pin-point sharp corners and crisp edges around.” Recently graded showcasing PSA’s lighthouse label, you can rest assured this is a high-quality card in a high-quality grade.

All six of these iconic Jordan cards can be yours! Sign up for PWCC today to bid on them. The auction ends on October 23.