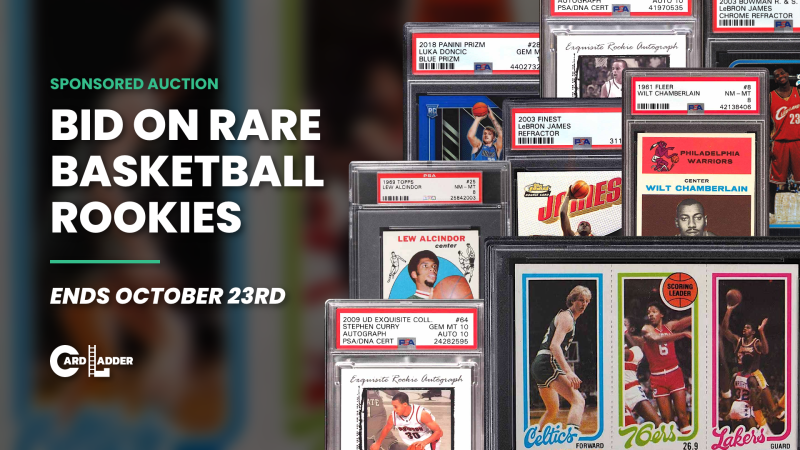 This post is an advertisement paid for by the current owner of the cards included within.

In this month’s PWCC Premier Auction, you have the opportunity to add rookie cards from some of the NBA’s most iconic players. Sign up for PWCC today to bid on the following cards. The auction ends on October 23:

The 2018 Luka Doncic Prizm has become a symbol of the hobby over the past couple of years and is one of the most recognizable cards out there. This Blue Prizm version provides scarcity with a print run of /199 and a PSA 10 population of 35. The blue parallel also adds eye appeal with the jersey color match.

LeBron’s 2003 Topps Finest Refractor is one of the most aesthetically pleasing of his rookie cards. This card’s production was limited to 250 copies, however, because it grades difficultly, it is hard to find copies assessed by PSA as MINT. Just 17 copies exist of this PSA 9.

Here we have another LeBron rookie refractor -- his 2003 Bowman Chrome. This card was limited to a production of /300 and an appropriate 23 copies grade as a PSA 9. This specific copy is in near pristine condition, with just slight centering issues preventing it from achieving a PSA 10.

In the final year of Upper Deck’s NBA license, they released 2009 Exquisite Collection -- one of the most beautiful and iconic sets of all time. Steph Curry’s rookie auto #72 features him in his Davidson jersey and was limited to just /225 copies. This PSA 10 has a population of only 12.

From the same set, we have Steph Curry’s rookie auto #64. This card was also limited to a print run of /225 and has a PSA 10 population of just 12. This specific copy is in perfect, box-fresh condition.

Now time for some vintage. The 1961 Wilt Chamberlain is one of the most legendary cards in the hobby. This PSA is in the upper end of the quality spectrum, with a population of just 180. This copy is in great condition, with 60/40 centering preventing it from achieving a higher grade.

The Lew Alcindor tall-boy rookie card is another iconic card any collection should pursue. Printed before he was known as Kareem Abdul-Jabbar, this specific copy is in superb condition to add to its scarce PSA 8 population of 169.

Larry Bird and Magic Johnson’s rookie card is one of the most sought-after cards in all of collecting. This card is extremely condition-sensitive with only 25 copies grading higher than this PSA 9.