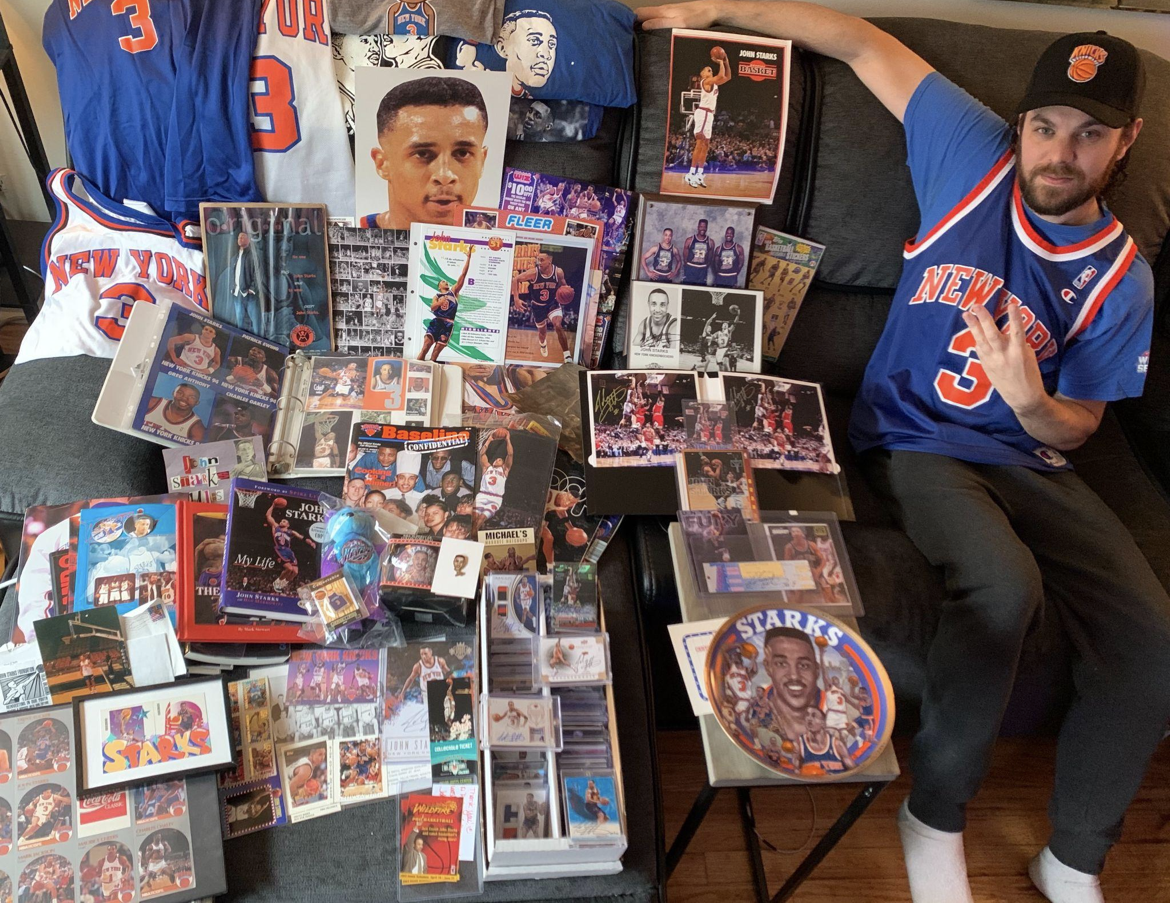 What does it mean to be a collector? Why does someone collect? These are often questions brought up in and outside of the hobby. For Joe collecting John Starks has been a passion of his for almost 30 years and it goes much deeper than cards. John Starks is the reason why Joe fell in love with basketball and specifically the New York Knicks. Starks as an undrafted rookie has one of the all-time great underdog stories in NBA history and in fact was the first undrafted player in NBA history to make an all-star team.  Starks resilience and passion for the game taught Joe a valuable life lesson of anything is possible if you try.

Joe was kind enough to give us his time for an interview and share his in depth journey since 1993 collecting John Starks.

Coolest Card (or 3): My Favorite card has to be the 1990-91 Hoops Team Night Sheets. It’s an uncut sheet of the team that was given out as a promo at a Knicks game. What makes the Starks card so rare on this sheet is the fact that there were no John Starks cards in the 1990-91 hoops set that year. In fact, there were no Starks cards released at all that year making this a true Rookie card of his. This sheet also features the Mark Jackson with the Menendez brothers in the background making it the rarest version of that card as well.

Another favorite item I have is a signed ticket of his first game as a Knick.

On the Lookout (What are you looking to add to your PC?): Adding the 1991-92 Fleer Acrylic/3D to my PC would be huge. Fleer offered a wrapper redemption where you could receive a 3D version of any card in the set. If there are any Starks out there, I NEED IT! A Starks logoman would also be nice!

It’s a Keeper (Coffin Card): Every card in my Starks PC is staying with me for life!

Fantasy (or dream come true; i.e. meeting John Starks): I had the opportunity to meet John Starks which was a dream come true! It was all thanks to Bleecker Trading in NYC for making that happen for me. I was fortunate enough to not only meet John, but share my lifelong PC with him. This entire experience was exhilarating and was something I will never forget.

Why do you collect John Starks? John Starks is the reason I love the Knicks and basketball. He was a fiery competitor who left it all on the floor every night. You could see the passion he had for the game and team. At times, he was even a little crazy, which as a youngster stood out to me.  He has a great life/success story too. His journey into the NBA is admirable. John’s a guy who wasn’t supposed to make it into the NBA but did with every obstacle in his way. He’s definitely a guy who taught me that anything is possible if you try.

When did you start collecting?

I first started collecting cards around 1990 but began collecting John Starks cards in 1993. My mom would bring us to Toys R Us and I was drawn to the card aisle.  It was somewhat comparable to a stocked shelf at Target now except that it was all packs and the aisle was way bigger.  At that time, cards were extremely popular and plentiful, it was the peak of the junk wax era.  There were cards of every TV show, movie, cartoon, rock band and sport you can imagine. I also remember waking up super early in the morning to catch Don West on the Shop at Home network. That was some fascinating TV for me. .

What was your first card/memorabilia? My first card ever was a Teenage Mutant Ninja Turtle card! My first John Starks card was a 1992-93 Fleer Drake's Cakes that I got out of a Devil Dogs box. I bought my first Starks autograph in 5th grade when I bought a signed 8x10 photo off a classmate for $20.

How do you organize your Collection? When it comes to all my John Starks cards, I have everything that’s not an autograph or Patch in a binder organized by year.  I have all my autograph and memorabilia cards in a separate box. All of my other Starks memorabilia and miscellaneous items are scattered all over unfortunately. One day down the line when I have a bigger space I would like to have it all contained and showcased in one area.

What was your biggest pick-up? Any time I can pick up a numbered pre-panini era insert is a great pickup for me. Earlier this year my friend Brad on Instagram found me a 1999-00 Skybox Autographics Purple Foil /10 of John Starks at a Vegas card show. I made my Instagram in May of 2020 and the best part about it is the connections and relationships I've built with all the collectors on this platform. I’ve had a lot of people reach out to me as well as help me pick up some big additions. So to me, those additions from my IG friends are the biggest pick-ups.

Do you have a funny/interesting collecting story you would like to share? This is an infamous story in my family.  I used to collect Sports Illustrated for Kids cards when I was a kid. When the 90s fad ‘Pogs’ came around I got a pog maker and wound up turning most of the cards into pogs. A lot of these cards would wind up being pretty valuable, especially the Tiger Woods rookie card. I still have all of these pogs to this day!

Is a Collection ever complete? Never! There's always something new to add or something you never knew existed out there.

What do your family and friends think about your collecting? My family has always supported my habit. They always get a kick out of some of the obscure/oddball items I pick up whether it's a John Starks beanie baby, a Starks dinner plate and mug or John Starks socks. My girlfriend is very supportive of my collecting too.