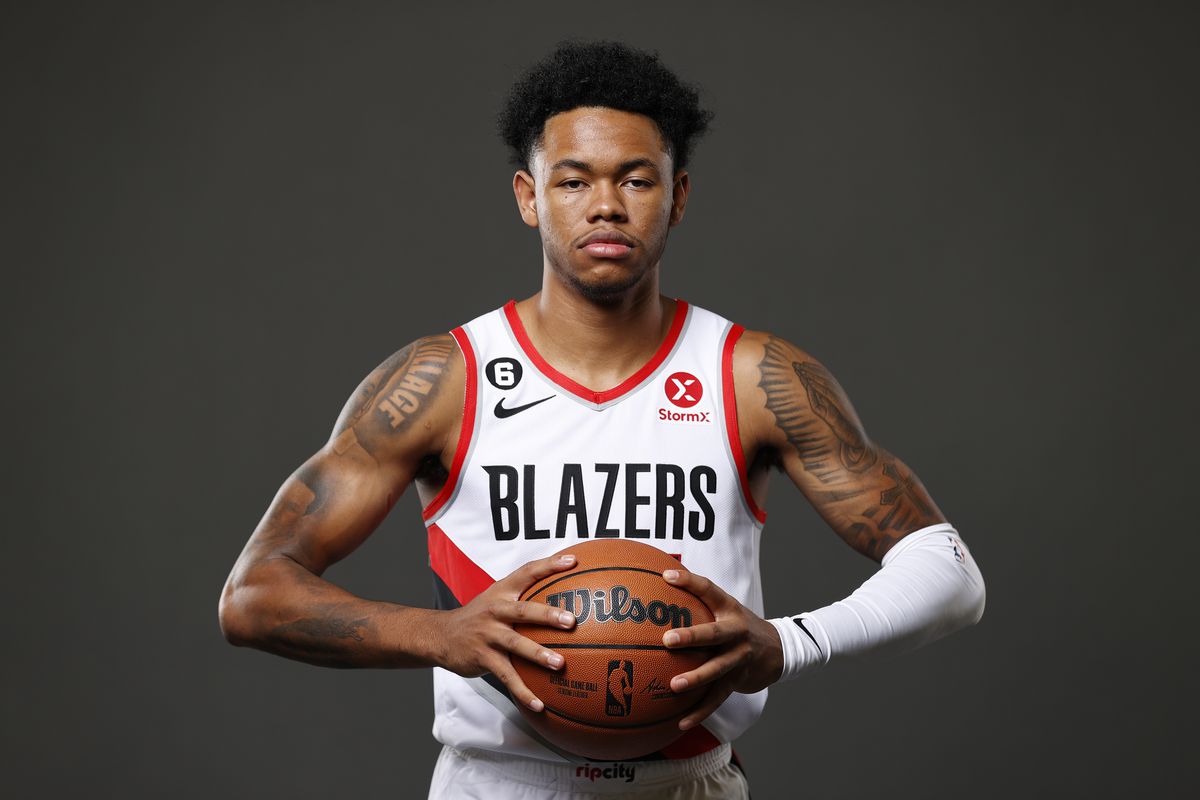 ***THIS IS NOT INVESTMENT ADVICE***

With the NBA season just 10 days away, I have picked 4 players who you should be watching this upcoming season. The first player we will be looking at is the Portland Trail Blazers starting shooting guard Anfernee Simons.

The 24th overall pick in 2018 had an interesting journey to the NBA, as you might recall he did not go to college. Rather playing at IMG preparatory academy in Florida which is known for its sports programs. This decision did not hurt him persay, as he was a first round pick but it definitely did not help him. He was just 18 years old two weeks before the draft and viewed by many as the ultimate project. If you can develop him, the risk will pay off and enrich the franchise.

Being drafted to the Blazers as a guard in 2018 was ultimately a catch 22 for not just Simons but also fellow rookie Gary Trent Jr. The Blazers from 2014-2019 were  a sure thing in the playoffs every year and viewed as a contender by some. While being drafted to a playoff team with a history of successfully developing guards is not a bad thing. It would be near impossible for Simons to see meaningful minutes with Damian Lillard and CJ McCollum. As a result of being on a veteran oriented playoff team with backup gaurds including Rodney Hood, Evan Turner, and Seth Curry, Simons appeared in just 20 games. The Blazers are one of the few teams without a G-League team, which becomes problematic as you had Simons just sitting as an inactive player. In the 20 games he appeared in the overwhelming majority were 1-3 minute stints at the end of quarters. The last game of the season, had the Blazers resting all their starters and it would be first time Simons played 13+ minutes.

Simons played all 48 minutes and exploded for 37 points, 9 assists, and 7 rebounds on 61% field goals and 63% from three. While many dismissed this as the last game of the season verse the horrid Sacramento Kings, it showed he can score at the NBA level. Regardless of who is playing or who you are playing, not many can score 37 points in the NBA shooting 61%.

As Simons sophmore campaign approached, it was clear he would be in the rotation with the departure of Evan Turner and Seth Curry. Simons would appear in 70 games and play 20 minutes per game. Unfortunately he would average just 8 as it was hard for him to find his footing as a 20 year old guard. Lillard and McCollum would go on to average a combined 52 points on 40 field goal attempts per game. Despite this, it was a step in the right direction with him in the rotation and showing flashes.

This year was ultimately a step back for Simons as the Blazers decided to play Gary Trent Jr over him. Trent Jr. was coming off a historic shooting streak the prior season in the Disneyland bubble so it was hard to blame them. Another road block came when they decided to trade for a 15-20 points per game scorer in Norman Powell. While this did eliminate the issue of Gary Trent, it made it worse as now the Blazers now had another undersized guard in Simons way. Simons saw a decline in minutes down to just 17 while Rodney Hood, Derrick Jones Jr, Norman Powell and Gary Trent all saw significant playing time over him. Despite this he still averaged his 8 points per game and improved his shooting percentages.

The stars would align for Simons this season as injuries and trades paved the way for him to be the Blazers #1 at times. He averaged 29 minutes and 17 points per game shooting 40% from three which were all career highs. Simons specifically stood out when Lillard missed the entire second half of the season. In 27 games, he averaged 23.4 points, 3 rebounds, 6 assists, on 42% from three.

What makes Simons such an intriguing player is his size and ability to move with the ball. At just 6'3" his 6'9" wingspan off sets his undersized standing at guard. His length combined with his ball handling allows him to create seperation and score with ease. This helps him rise over the defender and attack the basket with his 41" vertical which was on full display at the dunk contest.

With Lillard back healthy and Simons as the clear cut #2 option, it paves the way for Portlands season to almost hinge on Simons per say. If he has a breakout season and or performs likGe he did without Lillard, the Blazers would likely become a playoff team. Blazers complimentary players include; Josh Hart, Jusuf Nurkic, Nassir Little, Jerami Grant, Gary Payton II, Shaedon Sharpe,