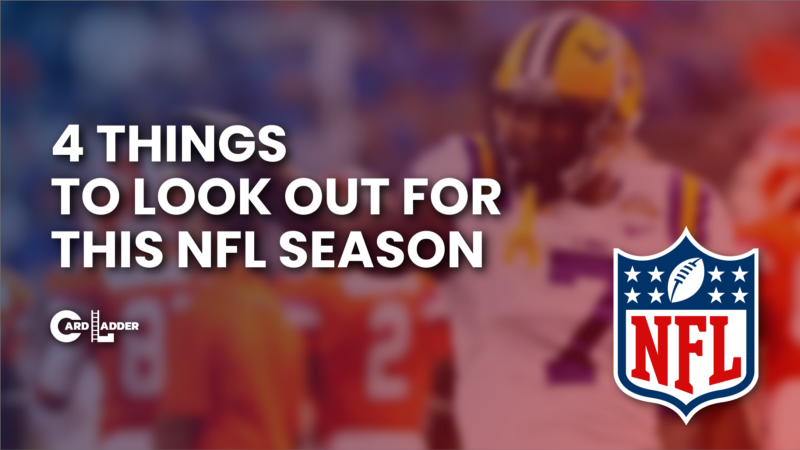 With the NFL season just a day away, fans cannot be more excited for the first season in two years which will allow fans in the stands at full capacity. In turn, what are four things you should look out for this NFL season?

The former 2019 first overall pick has had a shaky start in his first two NFL seasons but has shown flashes of brilliance. With a 13–18–1 record overall, this can be attributed to a multitude of things beyond his control. Head coach Kliff Kingsbury will also be entering his third season, on a much hotter seat than Kyler Murray to produce wins. The hiring of Kliff was extremely controversial as he had more losses than wins as a college coach. Second to third year development is where you are seeing a plethora of the franchise quarterbacks of the last decade make the most drastic improvement.

Above I tried to pick a wide variety of quarterbacks in the last 10 years who played their rookie season and are still active players in the NFL. Of course this is not the same for every quarterback as every quarterback has a different career path. Mahomes for example sat a year behind Alex Smith, Lamar Jackson did not start until week 10, while Deshaun Watson tore his ACL early into his rookie season. Passing statistics do not tell the whole story for some players such as Newton or Lamar who are dual threat quarterbacks. This will be an extremely pivotal year for Kyler as he has shown the ability to be a starter in this league but the Cardinals did not take him 1st overall just to be a Tyrod Taylor. The defensive side of the ball is revamped with all-pro JJ Watt in addition to first round pick Zaven Collins. Offensively we all know about DeAndre Hopkins but quietly added former all-pro A.J. Green and former Steelers running back James Conner with speedster Chase Edmonds taking over the starting role.

2. Is Matthew Stafford the real deal?

A debate that has been going on for almost a decade now will finally have an answer… Is Matthew Stafford just a stat monster who cannot win football games or has the lack of winning resulted from being a Detroit Lion? Both sides have valid statistics they often reference which we will get to later but first let’s see why the Rams will validate one side’s claim.

Facts about the Rams under McVay:

The Rams are the perfect spot for Stafford for a multitude of reasons, one being the offensive mastermind of Sean McVay. One of the brightest minds in football turned an almost unplayable Jared Goff under Jeff Fisher into an 11 win quarterback followed by a Super Bowl appearance as an MVP candidate. In addition to McVay, Stafford will have two of the best wide receivers in the NFL in Robert Woods and Cooper Kupp. Often overlooked for their lack of diva/showtime, Woods and Kupp have established themselves as two of the most reliable receivers in the league. In addition to the offensive side of the ball, the Rams have a top 3 defense entering 2021. Something Stafford fans often point to is the lack of halfway decent defenses he had while playing in Detroit. From 2011 to 2020, Stafford has thrown for over 42,000 yards and 260 touchdowns but has yet to win a playoff game. Stafford fans also often point to the fact that in Stafford’s 12 year career, he has only had a 1,000 yard rusher once and under 700 yards seven times. On the flip side many argue that franchise quarterbacks who sign $135,000,000 contracts should be able to overshadow some offensive weakness. Despite having a poor rushing attack, the Lions have supplied Stafford with a surplus of talent as wide receiver. Most notably Calvin Johnson but also the likes of Golden Tate, Kenny Golladay, and Marvin Jones. The statistic that many Stafford critics point to is the fact that Stafford has 8 wins and 67 loses vs teams with a winning record… That statistic is extremely alarming as Stafford has been in the NFL 12 years, started 165 games, with a plethora of weapons at wide receiver yet has not reached double digit wins when playing winning teams. Having poor defenses and a lack of a rushing attack is understandable reasoning for not winning playoff games but 8 wins in 12 years against teams with more wins than losses is alarming. This season will give Stafford the chance to prove himself as not only a statistical phenomenon but also a winner. In a division with the Cardinals, 49ers, and Seahawks it will not be easy with all 4 teams having playoff aspirations.

3. How long can Lamar Jackson dominate with the bare minimum?

Lamar Jackson over the last three seasons has been nothing short of sensational with an unheard of 80% career win percentage. The dual threat quarterback has proved many doubters wrong who limited him to being a gimmick or running back after winning the MVP in 2019. The elephant in the room has slowly gotten bigger with Lamar’s supporting cast seemingly more and more like a cast but not very supporting. Lamar in 2019 and 2020 was the Ravens leading rusher and was ahead of second place by 200 yards both seasons. The receiving side of the ball was not any better in 2019, as leading receiver was tight end Mark Andrews with 852 yards. Only one wide receiver on the entire roster had over 350 yards while no receiver had over 600 receiving yards. Keep in mind they still went 14–2 despite the lack of receivers. The 2020 was still abysmal as only 1 wide receiver had over 500 yards in Marquise Brown (769). Although this might seem like a massive improvement, Brown regressed as a player with issues catching the ball with just a 58% catch percentage. Mark Andrews was still reliable with 701 yards but he can only do so much as a possession receiving tight end. With JK Dobbins tearing his ACL in pre-season, even more of the workload will be on Lamar. Which begs the question of how long can Lamar Jackson dominate with the bare minimum? In Carolina we saw a similar situation develop with Cam Newton that led to injuries. The structures of the teams were fairly similar, with a reliable possession tight end in Greg Olsen (Mark Andrews) and speedy wide receiver with catching issues in Tedd Ginn (Marquise Brown). The lack of urgency to surround Cam with talent because his ability to create as a dual threat quarterback ultimately led to his demise. Lamar being much skinnier and shorter than Newton does not help with the hits he is taking long term. Lamar has 482 career rushing attempts in just 37 career games not including playoffs. Last season during the middle of the year, the Ravens brought in Dez Bryant who ultimately did nothing but at least it showed the Ravens made an attempt to help Lamar. Lamar led the team in rushing attempts in 2020 with JK Dobbins, Gus Edwards, and Mark Ingram on the roster, now only 1 of them remain entering week one. What Lamar has done on the field has been nothing short of miraculous with an 80% career winning percentage but the question remains of how long can this be sustained? With the emergence of the Cleveland Browns and the consistency of the Pittsburgh Steelers, it will be fascinating to see if Baltimore can make a move to help out their franchise quarterback.

4. Can Ben Roethlisberger play at a high level all season long?

Ben Roethlisberger at 39 years young will possibly be playing in his last season ever. The Steelers legend who was accumulated 2 Super Bowls over his career is looking to go out on a high note. Last season the Steelers were phenomenal weeks 1–11 going undefeated without much of a run game in large part to Big Bens dominant air attack. The Steelers had one of the deepest receiving cores in the league consisting of Tik Tok star Juju Smith-Schuster, Dionte Johnson, Chase Claypool, and James Washington. As the season progressed ultimately Ben’s body could just not hold up. Undergoing elbow surgery that caused him to miss the majority of the 2019 season in addition to never being in the best shape… Simply put it was easy for him to start off strong but hard for him to keep up while Brady who spends millions on self care has the ability to do so. Ben ultimately lost 3 of the last 4 games he started in the 2020 season which led to the Browns shocking the world and putting a beatdown on the Browns. The addition of Najee Harris should allow some pressure of Ben but the holdout of TJ Watt could prove to be disastrous.