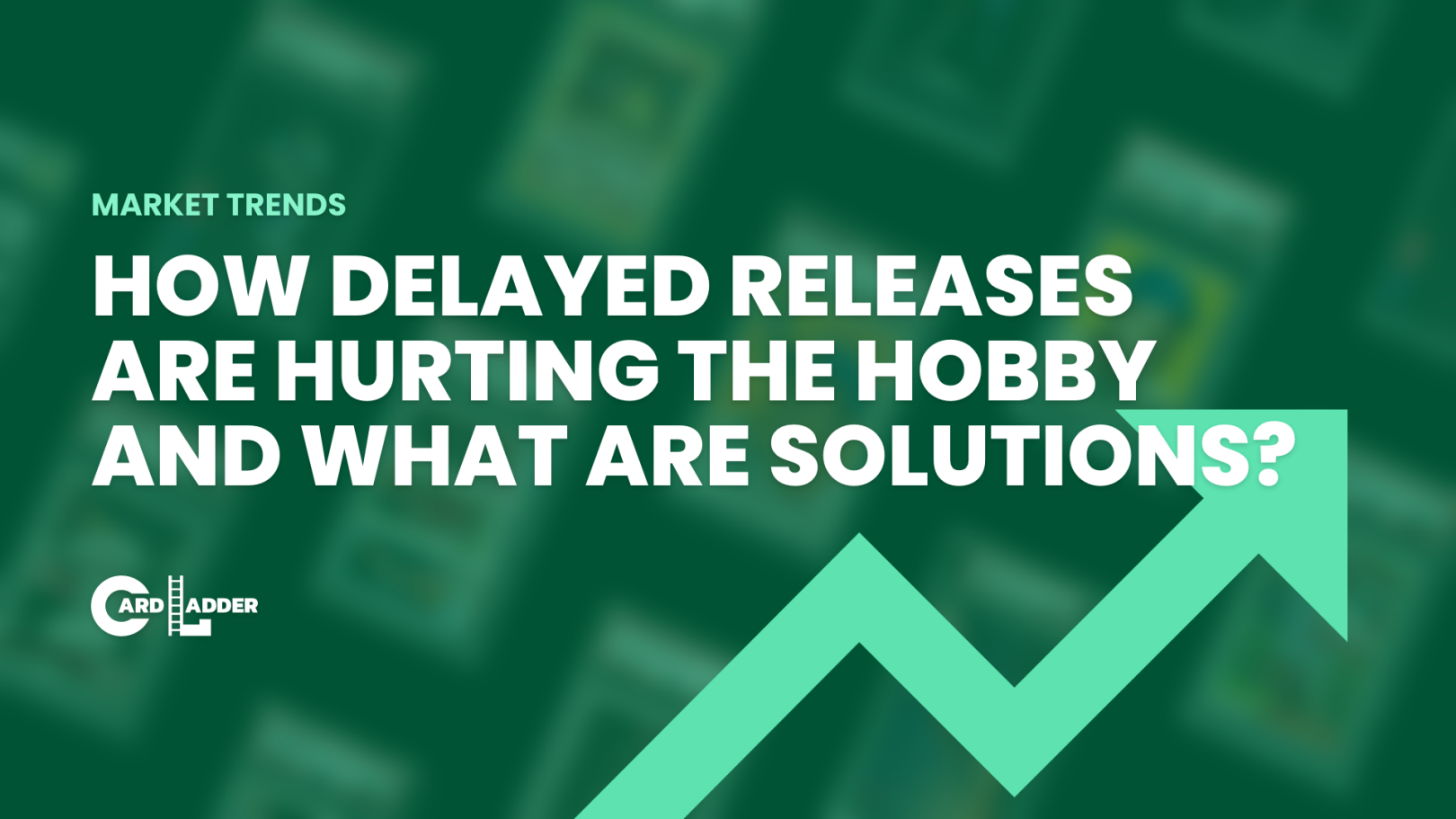 The elephant in the room that not many are talking about are the significant delays we are experiencing with Panini product releases. With no official statement by Panini on the root causes and or when product releases will be caught up, collectors can safely assume this will be a long-term issue. This article will take a deep dive into how delayed Panini truly is on fan-favorite products, how this hurts the hobby, and what are some of the solutions.

How delayed are NBA products?

As you can see from the chart above and the release dates over the years, it is going to get a lot worse before it gets any better. The dead giveaway of this is Prizm Draft Picks which is traditionally released before the season will now be released during the play-in games. Another example of this would be 2021 Revolution which is currently scheduled to release on April 27th, 11 days after the playoffs start. In comparison to last year, Revolution came out on March 10th which officially marked the midway point of the 2020-21 season. As of March 25th, Dave & Adams Card World released a tweet showing Panini's upcoming release schedule, and Prizm, Optic, and Select basketball all were not listed. With none of these products being released anytime soon, can we look to the NFL for some rough estimates as to when we will be seeing some of Panini's best annual releases?

With Prizm football this season not releasing (could be subject to delay again) until the day before the NFL Draft, what should NBA fans expect for Prizm basketball? When comparing the two sports release dates for Prizm, you can see the similarities in 2018 and 2019. It was not until 2020 when Covid hit that you saw a noticeable delay, 2020 Prizm football and basketball both coming out 99 days after the season started. Now with 2021 Prizm football allegedly releasing after many delays on 4/27/2022 the day before the NFL draft and 3 months after the season ended. Expect Prizm basketball to come out between the 2022 NBA Draft and Summer League. With it being safe to assume Select is releasing 3 months after Prizm, we wouldn't see Select possibly until the pre-season of 2022-23.

Is Covid the culprit?

Yes and no, I truly believe in my personal opinion there are many factors at play here. In mid-March of 2020, the United States went on its first lockdown to stop the spread of Covid-19. One would then presume that the tail end products of 2019-20 and all 2020-21 would be severely impacted. Strangely enough, 2020-21 products were affected but just by a few months if any delay at all. Products like 2020-21 Flawless basketball saw no delay as it released 400 days after the start of the 2020 NBA season. For reference, 2018-19 Flawless basketball was released 389 days after the start of the 2018 season. So can it really be Covid causing these massive delays which we were not experiencing during the height of the pandemic? A statement by Panini clarifying what is really going on would be greatly appreciated by the community (their customers).

Why is this a problem?

When one company has the license to produce NBA and NFL cards, it is important for them to actually produce cards consumers want during the season. Collectors of all ages want to be able to pick up a card of their favorite team's new rookie or free-agent addition. For investors, a big part of their game is to buy rookie cards of rookies during their rookie season and watch the price go up or down based on their play. The hype of a lot of guys goes out the window the second the new class comes in because the prior year's draft is no longer the new cool thing. We see this happening now with players like Kira Lewis, Isaac Okoro, Devin Vassell, and Payton Pritchard just to name a few. Only four NBA licensed products have been released during this season's entirety; Hoops, Origins, Donruss, and Elite. All of which to be brutally honest, no one really cares for and the prices of prior year's releases reflect this. The inevitable overlap of this season's products into next season is problematic and unless someone at Panini steps up and makes a tough decision, this could be the new norm until Fanatics takes over in 2027.

What are some solutions?

For those who have collected for over a decade, you can remember the 2011-12 NBA lockout season. Only 66 games were played that season and Panini chose to only release 5 products starting in February of 2012. The 5 products consisted of Hoops, Preferred, Gold Standard, Limited, and Past & Present. None of which featured rookie cards but rather XRC redemptions similar to Select football today. In a 2011 article published by Cardboard Connection they said; "During the NBA's labor dispute, Panini remained tight-lipped about their plans. Had the season been lost, it is very likely we wouldn't have seen any NBA cards at all."

Could the solution be what Panini decided to do in 2011-12? I think it would be a very viable and legitimate solution. For the 2020-21 NBA season Panini released 28 products not counting collegiate products. While having a wide variety of products is great, at what cost is it coming at this season? Are products like Clearly Donruss, Black, Chronicles, Recon, Illusions, and Flux really worth producing during a time when we are seeing collector's favorite products being delayed 230+ days? Minimizing products or even cutting it in half from 28 t0 14 would hurt Panini's profits but in the long run could prove to be a good thing. Widely regarded as the best year of Panini basketball cards came in 2012-13, the year after they decided to release just 5 products.

Ultimately no matter what you think the solution is, I feel we can all agree the product delays we are experiencing is impacting the hobby negatively.