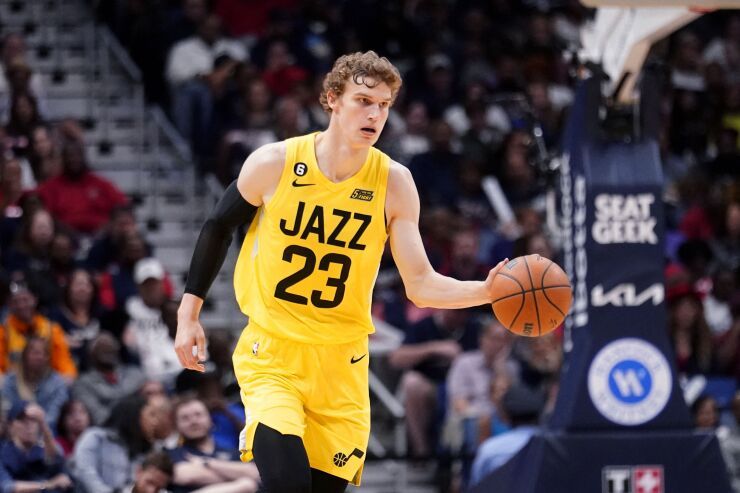 Lauri was one of the brightest young stars entering the league in his first two seasons but ultimately flamed out in a dysfunctional Bulls franchise. A combination of injuries and poor coaching really derailed his career after the first two seasons. After being dealt to the Jazz, many saw them as a franchise under rebuild. Quinn Snyder had left and most notably Danny Ainge had traded its two all-stars in Donovan Mitchell and Rudy Gobert. This in turn left Utah without a star but what many people overlooked was the fact they still had a roster full of talent, young and old. While names like Kelly Ollynk and Mike Conley aren't sexy, they are solid starting level players who have proven they can contribute at a high level for a long time.

The first thing that stands out is the lack of name brand talent you are used to seeing in Utah. Since Stockton and Malone to Deron Williams and Carlos Boozer all the way to Mitchell and Gobert, Utah has had a star duo for the latter part of the last 30 years. Now the Jazz have a committee approach running a 10 deep rotation with no stars but good fundamental players. Many assumed and maybe rightfully so that the Jazz would be tanking but might have underestimated the power of team basketball

The 2014-15 Hawks come to mind and draw many parallels to the 2022 Jazz. With the departure of franchise stars Joe Johnson and Josh Smith, the Hawks were not in shambles but had no real identity or expectations. The Hawks shocked the world and won 60 games with a surprising four all star selections in Jeff Teague, Kyle Korver, Paul Millsap, and Al Horford.

Possibly the best comparison is the 2018-19 Clippers! Trading Chris Paul for Patrick Beverly, Lou Williams, and Montrezl Harrell the trade itself is very reminiscent to the Donovan Mitchell trade. Many assumed the Clippers would be tanking as they completely overhauled their roster. Thanks to Danilo Gallanari, rookie Shai Gilgeous, and the aforementioned players they took the 2019 Finals Warriors to 6 games.

These two comparisons go to show you can win and win big during the regular season with team basketball. The Jazz roster is comprised of overlooked and misused talent, sometimes all someone needs is a chance or second chance for that matter. Bol Bol is a perfect example of this, Denver refused to use him. Boston traded him after three weeks before finding a home in Orlando.

Jarred Vanderbilt was dumped to the curb by Denver before a career renaissance in Minnesota last year. Collin Sexton tore his ACL last season and went unsigned in free agency for 3 months. Talen Horton Tucker was the Lakers 2021-22 scapegoat but now has found himself a contributing role in Utah. Lauri is the head of this vessel who’s career honestly went to shit in Chicago but bounced back in Cleveland last season. Lauri is now having a career year in Utah and will likely make the all-star team as this pace.