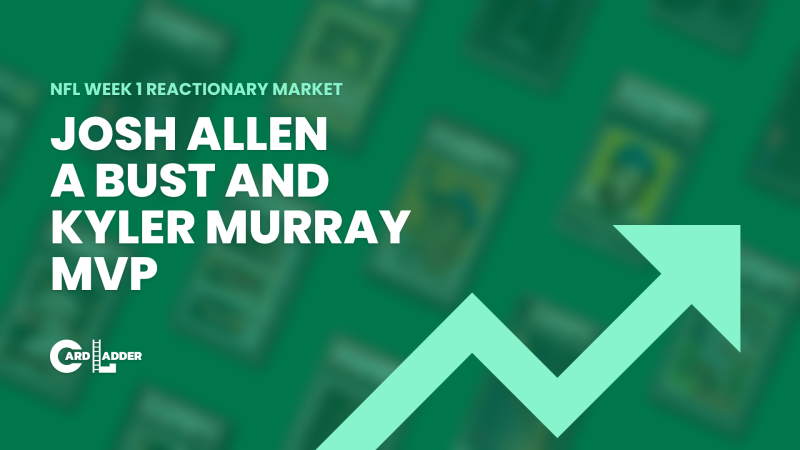 With the dust settled from the action packed week one, how has the market responded to stellar performances and some not so stellar performances? The reactionary market was fueled by reactionary hot takes across sports card social media calling for players to be benched, MVPs to be announced, and even players written off as busts… Instead of looking at what people say, let’s look at what their wallets said using Card Ladder sales data.

As much overreaction there was, the weekly percentage changes said otherwise. Despite stellar or poor play from star quarterbacks such as; Aaron Rodgers, Tom Brady, Patrick Mahomes, and Russell Wilson to just name a few their markets didn’t see much change. We see massive increases for young quarterbacks who played out of their mind such as Jalen Hurts, Sam Darnold, Kyler Murray. Veterans with questions surrounding their career also saw noticeable increases with Derek Carr, Matthew Stafford, and Dak Prescott. Carr, similar to Stafford has been a stat monster for most of their career but with both players in new scenery, they have something to prove .Both Carr and Stafford dominated in their new stadiums in front of fans for the first time in primetime week 1 football. It will be interesting to see if there’s a correlation between winning primetime Sunday night and Monday night games with price increases. Dak Prescott on the other hand might not have won but he was another dominant quarterback who fell just shy to Brady’s Buccaneers. I personally would not be worried or shocked if top tier QBs don’t move at all or even possibly lose a percentage over a week. Large movements after a one game performance are for the unknown, the unproven, the reactionary market. We all know what Russell wilson is capable of, so despite his amazing performance, its expected from him. The numbers from week 2 will be very telling as we will slowly over time get a larger sample size.