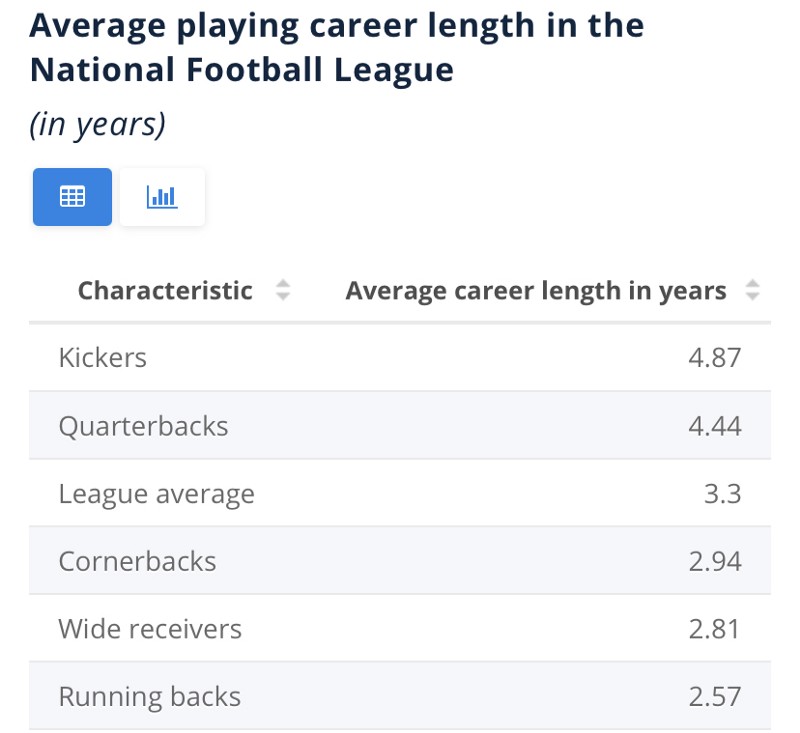 Prior Disclaimer: Card Ladder’s Chris Hoj does collect Christian McCaffrey but he had no influence or knowledge of this blog.

When it comes to investing in a player, what are the things you look for? Assuming longevity and high market ceilings are two of those things, running backs are likely not very high on your list. The brutal position of running back has the shortest career span out of any position in the NFL.

Which is understandable considering the physical and brutal nature of the position. In this article, we will look at the top running backs of the past and present and analyze their sports card market as well as their careers. When you think of who were the best running backs in the last decade, players such as; Adrian Peterson, LeSean McCoy, Frank Gore, Marshawn Lynch, DeMarco Murray, Matt Forte, Le’Veon Bell, Arian Foster, and Jamaal Charles all likely come to mind. What do their card prices look like today and let’s look at why that might be the case. While reading this, keep in mind some of the current top running backs and how the stars from a decade prior might be able to help you dictate a current running backs market.

Similar to the title, Adrian Peterson is the exception not the rule. Only two running backs have won NFL MVP in the last 15 years with LaDainian Tomlinson being one and Peterson the other in 2012. Peterson defied all odds returning from his torn ACL in a record amount of time to then rush for 2,097 yards. A 13 year career in the league while the league average is just under 3 years, there is nothing this man has not accomplished.

Which in turn reflects in his sports card prices, at a little over $650 for a Topps Chrome refractor rookie PSA 10, he blows other running backs prices out of the water. This is understandable though as he has become an iconic figure in the NFL while miraculously maintaining a long career playing at a high level. In 2 of Peterson’s last 3 seasons, he totaled over 1,100 total yards which many half his age could not say. Just a fair warning, that Peterson is starting off on a high note and it’s only downhill from here price wise.

Shady or LeSean McCoy might not have the career recognition of Adrian Peterson but statistically he was one of the most dominant running backs over his 11 year career. Spending the majority of his career with the Eagles and Bills, he made 6 Pro Bowls in his career.

Despite his hall of fame like career, McCoy does not sell well at all. With no Chrome graded refractors selling. We can see raw ones on eBay selling for under $10 while active listings are up under $15. In comparison, Patriots third year back Damien Harris Prizm silver last sold over $30.

Beast mode has made a name for himself on and off the field, becoming one of the NFL’s most beloved personalities. Being on countless commercials as well as cameo appearances on television shows such as The League, Marshawn has marketed himself nicely to the masses. In addition to that, he has the nickname Beast mode for a reason. The 5x Pro Bowler had a phenomenal career spending his prime years with the Seahawks and Bills. One of the most notable moments of Lynch’s career was in 2010, the iconic 67 yard run which was later named Beast Quake. In which the Seahawks upset the reigning Super Bowl champions in large part due to Marshawn’s 67 yard rushing touchdown where he broke 9 tackles. Marshawn’s play style was a violent aggressive style of football which he described as “run through a mf face”.

Despite Marshawn’s on and off the field success, his card prices do not reflect that. Marshawn Lynch Topps Chrome refractor rookie is selling for less than $30 with no PSA 10s sold. If you’re thinking well maybe the patch autos sell for a premium, that is not the case either. The last 3 sales of Lynch’s true National Treasures RPA are $98, $298, and $150. This puts his prices well below players such as Jonathan Taylor, Nick Chubb, Josh Jacobs, Saquon Barkley, and just about every other top 15 active running back.

Before we get to the other running backs listed above, the main three covered above seem to expose the elephant in the room when it comes to investing in running backs. Adrian Peterson is the exception not the rule when it comes to all things running backs and many still would consider $671 relatively cheap for what he has accomplished. McCoy and Lynch on the other hand, also hall of fame running backs sell next to nothing. When we look at basketball prices, all time greats at their position seem to hold value over time. Whereas in the NFL, the running back position is the opposite even if the players overcome the short career expectancy.

Looking at the prior decades running back stars, the first thing that jumps out at you are the prices of the cards. All of which outside of Frank Gore are under $10… Gore’s high price can be attributed to being from an older set, 2005 chrome refractors were fairly rare and box prices are outrageous with Aaron Rodgers rookies. You can’t help but think if a DeMarco Murray is worth just $2 raw and $40 in a BGS 10 while an Ezekiel Elliot is $30 raw and $150 as a 10… What does the long term future of Elliot’s Prizm rookie card hold? Although it might seem like forever ago, these players were dominating as recently as 4 years ago. Todd Gurley was one of the main reasons the Rams made the Super Bowl in 2019… Now he is out of a job and under $5 for a Topps Chrome rookie refractor. The fall off is steep and sudden in running backs, history tells us this. With current prices in today’s market, it’s not like that changes anything. Science, physics, history, and NFL teams aren’t going to change because of unprecedented sports card market.

Using Card Ladder data seeing what current top running backs sell for in our unprecedented market, we should assume we are on a runaway train with a cliff in the distance. The prior decades best running backs Topps Chrome refractor rookies and other high-end cards can be found for next to nothing. So what will change for the current stars just even 2–3 years from now? It is important to note, collecting is all about what you like, don’t let anyone tell you what to like or what to collect. With that being said, it’s worth analyzing the risks and rewards with any purchase. The top running backs of the prior decade outside of Adrian Peterson, sell for less than guys you wouldn’t start on your fantasy team today. This could be attributed to many things such as the dynamic of the position being second fiddle to the quarterback. With the NFL making a pass friendly league with all the rules favoring passing the ball, it’s understandable why even receivers outsell running backs. As the title says there are exceptions to this rule with freak of nature Derrick Henry’s power running as well as Christian McCaffrey’s ability to play both receiver and running back. The only question for them is longevity, as their usage takes a toll on the body. The turnover rate at this position is so high, that it potentially scares collectors away because many know the cliff is coming sooner than later. Teams unwillingness to pay running backs large contracts puts many players in bad situations leading to holdouts. We saw what happened with Le’Veon Bell, DeMarco Murray, and Todd Gurley to just name a few. It seems once a decade a running back comes along who stands the test of time and becomes the exception not the rule. With LT and AP dominating their respective decade, it begs the question of who’s next?