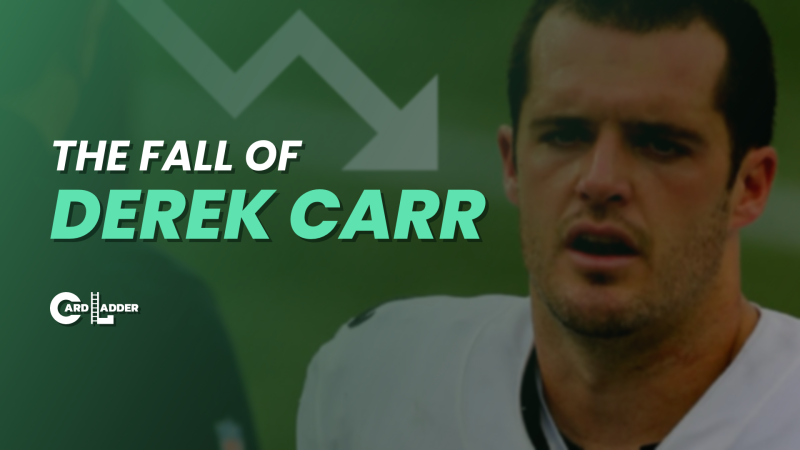 The Raiders were off to a blazing hot start to the 2021 season but in typical Raider fashion the train came off the tracks. Weeks 1-3 the Raiders impressed on both sides of the ball with Derek Carr finally being able to put it together statistically but in the win column. Going undefeated playing against the Steelers, Dolphins, and Ravens, Carr amassed 1203 yards, 6 touchdowns, 2 interceptions, and a 101.2% passer rating.

Since then things have gone down hill pretty dramatically, they have lost the last 2 weeks in games they could have easily won. Not only did they lose to the Chargers and Bears, the offense was stagnant only scoring 14 and 9 points. This was a big change from their fast pace high octane offense weeks 1-3 scoring 33, 31, and 26. In those 2 games, Carr has just 402 yards, 2 touchdowns, but also 2 interceptions with a passer rating of 75%.

In turn, his market has fallen pretty substantially in the last 10 days. When investing in a quarterback like Derek Carr, winning is everything. At 30 years old and being a starter for 8 years, you know what you're going to get statistically. Statfew Padford also known as Matthew Stafford is a great example of that, despite throwing for 45,000+ yards in 10 years he had no market due to the lack of winning. Now with him being on the Rams winning games, his market is up 5,000 index points and seeing all time high sales frequently. People rather put their money into a young quarterback with potential and the ability to grow than a 30 year old veteran. The saying, you can't teach an old dog new tricks also applies to quarterbacks. In the last week, Carr’s market is down 23.91% and in the last 10 days is down 4,695 points.

The rise and fall of Carr should be a good lesson for many investors when thinking about investing in Matt Ryan, Derek Carr, Matthew Stafford, and other 30+ year old quarterbacks with massive stats but not many playoff wins. People want to strike gold not copper, hence the money in unproven commoodities compared to proven starters. People want to strike rich and hit the next Mahomes that will potentially make them generational wealth. On a positive note, Carr was a low risk medium reward investments compared to a player like Tua Tagovailoa.