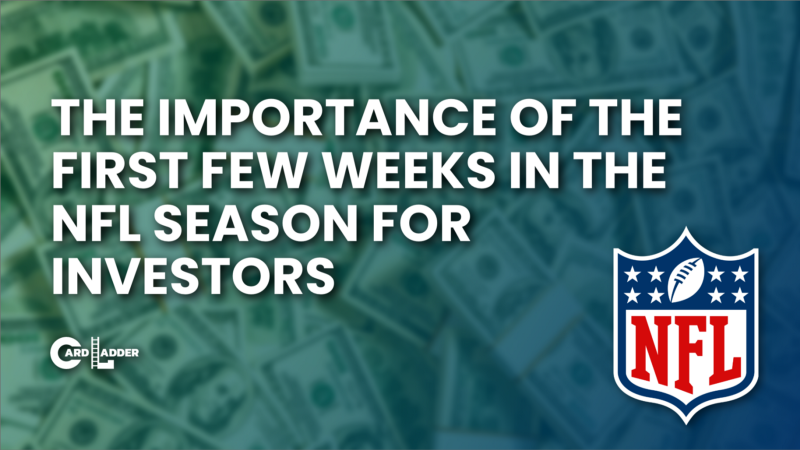 With the NFL season upon us, peoples investments in the hundreds of thousands to even millions will be on full display. With the NFL having such a limited number of games per season (17), it is extremely important for teams to win in the first three weeks. In the NBA with an 82 game season and MLB having 162 games, every year we see teams start off slow but bounce back. The history of the NFL shows us that the first 2 to 3 weeks will dictate your season if you start out slow. With all of the money being spent on young quarterbacks on bad teams, it is extremely important to understand this if you plan on holding into the season. Winning matters above all else in the NFL with stat monsters like Matthew Stafford, Kirk Cousins, Matt Ryan, Phillip Rivers, Drew Brees, and Derek Carr seemingly don’t sell historically well relative to their absurd passing statistics.

Excluding Mahomes in part because we know what we can expect from him… A plethora of heavily invested young guys have tough outings weeks 1–3, as highlighted in green are teams that made the playoffs in 2020. Although, I would not underestimate the non playoff teams either. Last year with Covid and injuries, a plethora of good teams missed the playoffs including the 49ers, Patriots, Bears, and Cowboys (offensively). Knowing about the history of 0–2 and 0–3 teams, it is extremely important for short term investors to know that these first two to three weeks can be and are the most crucial of the season for playoff teams.

Justin Herbert for example will be facing the #1 defensive team in 2020 (Washington), the highest scoring offense in the league with Dak Prescott (Dallas), and the odds on favorite Chiefs to come out of the AFC all in his first 3 weeks. An extremely tough outing for a young quarterback whom many spent large sums of money on. Herbert for many is a long-term buy but the potential of him being on another horrid team could potentially drop his prices. With the hopes of Herbert’s prices returning to today’s prices if he can potentially win in the coming years. It does not help that the Chargers are in the same division as the Chiefs, barring injury never allowing them to win a division title. The sports card boom is all relatively new with many investments not even seeing their third year in the league. In prior years, the longer the player has been in the league without winning, their prices slowly start to fall off. Primarily seeing this with the likes of Matthew Stafford and Drew Brees during the Saints playoff hiatus. This is not to bag on Herbert, as across the board the second year quarterbacks have tough outings weeks 1–3.

Years 3–5 are extremely pivotal for an NFL quarterback, as your rookie contract is expiring and the team has to make a decision if they want to pay you a massive contract or move on based off your production. The glamour of being a #1 overall pick wears off as the years go by, and now you are judged on your winning not where you were drafted. We can see this with Stafford from 2012 to 2014, his third to fifth year in the league, his prices fell despite his statistics. Over those three seasons, he passed for 13,874 yards but he unfortunately was not winning games. Hopefully this was helpful and gave insight to the importance of starting out strong and winning games early in your career.