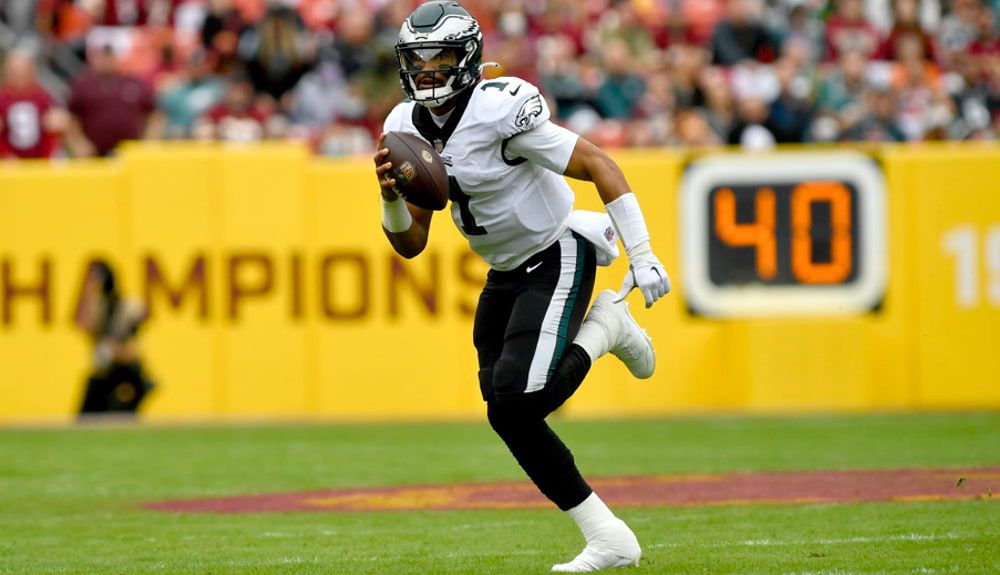 In the first round of the 2020 NFL Draft, four quarterbacks were selected in the top 26. From picks 27-122 only one quarterback was selected and his name was Jalen Hurts. Hurts had an excellent college career that included many highs and some extremely notable lows. As a freshman Jalen led Alabama to the National title game against Clemson where they lost to Clemson led by Deshaun Watson. The next season, Alabama found themselves once again in the National Title game facing the Jake Fromm led Georgia Bulldogs. Heading into halftime the Crimson Tide had 0 points on the board, Saban ultimately made the decision to bench Hurts. That birthed the heroic rise of Tua Tagovailoa where he triumphantly led Alabama back down 13 points, winning the game 26-23. Throughout this ordeal it must be said that Hurts did not pout and remained supportive and a great teammate. Hurts remained in Alabama for the 2018 season, and was a mentor to Tua. Eventually transferring to Oklahoma in 2019, he had his best year to date throwing for 3800 yards and 32 touchdowns. They lost to the eventual champions in LSU and Joe Burrow in the Peach Bowl.

The Eagles selected Hurts with the 53rd pick, which at the time was a very controversial pick. The Eagles carousel of Wentz and Foles had been well documented with controversy every step of the way. In 2019, the Jaguars gave Nick Foles a massive contract which the Eagles then gave Wentz four years 129 million. So when they drafted Hurts a year after making Wentz their franchise guy, many questioned the decision. Wentz was horrid the 13 games he started winning just three games and throwing 16 touchdowns and 15 interceptions. The Eagles started Hurts weeks 13-17 and he was not great either but showed flashes.

In a not so shocking but shocking turn of events the Colts acquired Wentz from the Eagles. The 2021 season was relatively a disaster for the Eagles riddled with injuries most notably to Hurts and star running back Miles Sanders. A nine win season was still a 5 win increase from the prior season. Hurts was the leading rusher in yards and touchdowns (by 3) with an underwhelming receiving core led by rookie Devonte Smith.

While they did not have much expectations heading into 2023, the addition of star AJ Brown showed they were serious. With Sanders hopefully back healthy in addition to Brown, Smith, and Goedert the Eagles had the first core of elite weapons since the title run.

Through three weeks the Eagles have dominated all of their matchups. Despite the score in week 1 that was fueled by a late Lions comeback, they had the control of that game. Primetime Monday Night Football vs the Vikings was a true test of their ability. They made Kirk Cousins look like Nathan Peterman while the offense was still elite. Shockingly as the Vikings exploded on Green Bay in week 1 with their star studded offense. A division rival game against the Commanders was a joke! The Commanders were down 24-0 until midway through the fourth where they got a safety. A last minute garbage time touchdown gave them 6 points. The Eagles on both sides of the ball looked good oncemore and at 3-0 people are starting to proclaim them the NFC East champions!

Over the last 3 months he has seen great growth and over the last 6 months he has had borderline best case scenario growth. With players like Josh Allen, Aaron Judge, and now Jalen Hurts it is good to see nature healing for lack of a better term. Markets are moving back towards going up or down based upon play, opposed to if a social media influencer said to buy said player. With a fairly easy schedule the rest of the season, it is Hurts division to lose at this point. A top 5 mvp candidate as it stands now, who knows what the Eagles are capable of over the next four months! Even if the Eagles struggle, Hurts has a history of perseverance and leading his team.