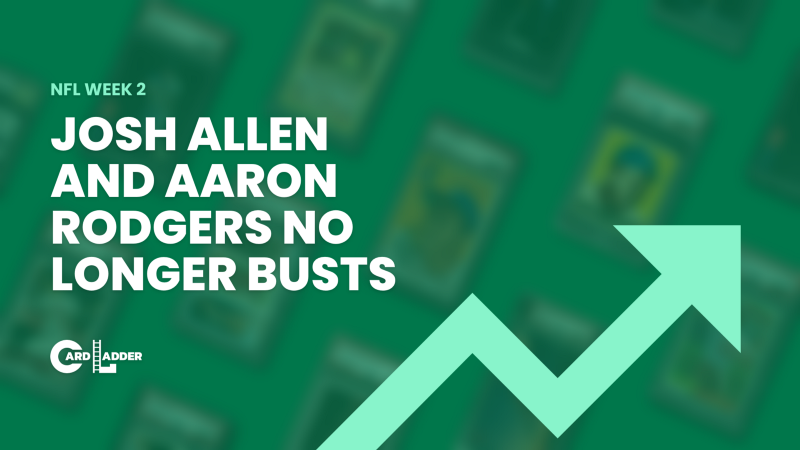 With week 2 in the books and giving the market time to react to the performances, how did some of the top tier and even lower tier quarterbacks perform? Using Card Ladder data, we can see how each player’s market reacted using the player index weekly % change function .

Lamar Jackson: The former MVP overcame historical struggles vs the juggernaut Chiefs in a miraculous comeback. Lamar Jackson that night on sports card social media was being praised like no other, which is strange for a player who typically receives no love… Similar to Durant in the playoffs vs Milwaukee, people were coming out of the woodworks to proclaim KD as the best player on the planet. Conveniently they bought Durant prices during peak and were trying to recoup as much money as possible. So when we see the sports card media’s reaction this big, his market rising just .9% does not add up.

Derek Carr: The opposite of Lamar Jackson you might say, receiving little to no love in the sports card social media world yet seeing massive increases over the last two weeks. Carr rose 31.22% after a master class 382 yard performance on the road in Pittsburgh to get the Raiders off to a 2–0 start. Carr over the last 5 years has shown he can play at a high level, the only question is can he win and can he stay healthy. In the last 3 seasons alone, he’s thrown for over 4,000 yards, over 20 touchdowns and under 10 interceptions. If Carr can continue to win, expect his prices to continue to trend upward. Likely not at 31% but still noticeable amounts especially with a fairly weak schedule over the next 5 weeks.

Taylor Heinicke: From XFL backup to outplaying Giants former top 5 pick Daniel Jones, the Washington backup quarterback showed up and out in prime time. A massive 290% increase in the last week shows in his 3 starts that people have long term faith. In last season’s playoffs, Heinicke came closer to beating the Buccaneers than Aaron Rodgers, Patrick Mahomes, and Drew Brees. Similar to Sam Darnold’s market, their prices are predicated upon winning. Case Keenum saw massive price increases in 2017 as the Vikings were winning football games, we all knew Case was not elite but winning matters.

Jared Goff: Former MVP candidate and starting Super Bowl quarterback needed a change of scenery after his relationship with McVay stalled. Many did not know what to expect with Goff outside of offensive mastermind McVay’s system. Prior to McVay, Goff was borderline unplayable and just a year later looked elite. Despite starting off 0–2, Goff has shown he is a very solid NFL starter. The Lions are in the middle of a massive rebuild but still have been extremely competitive with top tier teams in the Lions and 49ers. In two games Goff has thrown for over 580 yards with 5 touchdowns, 68% completion, and 90+ passer rating. All while throwing to sub par talent at wide receiver and TJ Hockenson.

Sam Darnold: From seeing ghosts in New York to seeing his Panthers start off 2–0, Sam Darnold has had quite the career turnaround. Darnold’s Player Index increased 35% from the beginning of July to the eve of kickoff. Given this rise was based on speculation and meaningless preseason games, the hobby appeared to view Darnold as a talented quarterback with the potential to rebound from a disaster of a Jets franchise. It also helps that he has a stronger supporting cast in Carolina with Christian McCaffrey, DJ Moore, and Robby Anderson. In the last three months, Darnold’s Player Index has risen 3,757 points total. Does his production justify the current market and is it sustainable? His two wins came against the Jets and Saints, and in those two games, Darnold threw for 584 yards, three touchdowns, and a 68% completion percentage. In other words, he’s playing at an elite level. Also, turnovers still seem to be a problem for Darnold with one interception and two fumbles. Despite that, the weak Panthers schedule could continue to boost or maintain Darnold’s prices as long as they continue winning. The Panthers’ next six opponents are the Texans tonight, followed by Dallas, Philadelphia, Minnesota, New York, and Atlanta. Unfortunately for Darnold, he plays in the NFC South with Brady’s Buccaneers — the division is likely out of the picture, but a wildcard is very possible. Darnold’s market moving forward will be based on winning. If the Panthers regress to a .500 team, Darnold’s market will tank, as it is hard to justify the high prices for stats and stats alone, just as we’ve seen with Kirk Cousins and Jared Goff.

Conclusion: The overall trend of this season seems to be undervalued and or unproven quarterbacks playing well and winning seeing the biggest price increases from week to week. Josh Allen, Aaron Rodgers, and Tom Brady do not see a noticeable week to week change due to what the market expects. 5 touchdowns will not move the needle for a 7x Super Bowl champion but it will for Jared Goff. Unproven commodities short term success, equals reactive large increases while proven commodities need to win MVPs, playoff games, or achieve milestones.