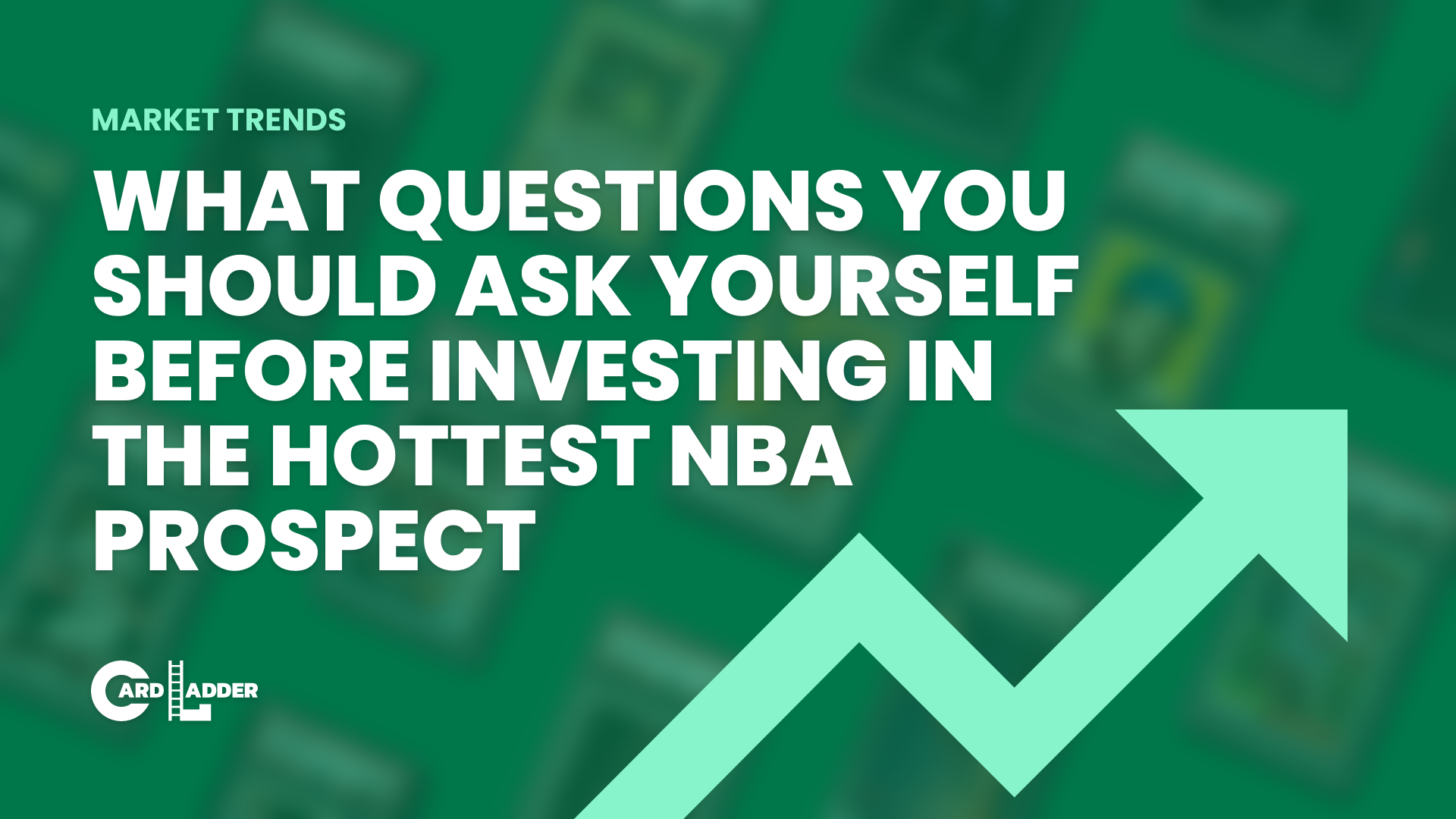 With the NBA season around the corner, there seems to be a yearly prospect in the card community that is the chosen one. Leading up to last season, many likely remember the Bol Bol and Darius Bazley phenomenon… This year’s winner so far seems to be Cavaliers third year guard, Darius Garland. Using Card Ladder’s player index, Garland across the board has been the hottest prospect by far. Not only is his market index at an all time high, his weekly, monthly, and quarterly numbers seem to keep going up. Garland’s weekly % change is 41.37%, monthly 37.44%, quarterly 47.92%, while his player index was 1,485 on September 20th and is now sitting at 2,046. For comparison of how staggering this growth is, players such as; Zion Williamson, Trae Young, Luka Doncic, Ja Morant, and LaMelo Ball all have seen growth under 6% this month. Is Darius Garland going to be the real deal? Or is he just this year’s off season chosen one? Here are some questions you should ask yourself before potentially investing in the NBA’s hottest prospect.

Although the above bullet point is not a question, it has to be asked even if Garland has a phenomenal season, will anybody care? Collin Sexton, the Cavaliers point guard averaged 24.3 points, 4.4 assists, 3.1 rebounds, while shooting 47% from the field and 37% from three. Sexton, most notably being the Cavaliers top pick in 2018 while LeBron was a free agent, had many doubters. Outside of giving the most half ass recruitment speech to LeBron on live national television, Sexton has statistically improved greatly every year. Every season he has increased his points per game by 4, field goal percentage, and assists per game.

Using Card Ladder’s player index data tool, we can see despite taking a great leap in his third season. His market seemingly tanked all while averaging 24 points as a 22 year old. This is not to pump up Sexton, as he has problems of his own. I want you to think more about how a similar player to Garland who happens to be on the same team had a breakout year and his market did nothing but tank.

Using the same tool, we can also see the rise of Sexton which is very reminiscent and borderline identical to Garland. Leading up to the NBA season over the summer we can see slow and steady growth for months. Then BAM! From December 20th to the 27th, Sexton rose over 4,000 points on Card Ladder’s index. In comparison Garland in the last 7 days, jumped over 600 points on the Index.

In the modern sports card market, there is more than just playing good when it comes to prices. The team you play for and the market you play in, play crucial roles in the modern sports card world. The Cleveland Cavaliers since the departure of LeBron have been extremely dysfunctional. Across the board, it seems Cleveland picked up where they left off the first time LeBron left. A perfect metaphor for the Cavaliers dysfunction would be the fact they’ve had 4 head coaches in the last 4 seasons with two quitting mid season. Outside of the dysfunction, it does not help that Garland is playing in Cleveland, a small market franchise with a history of players not selling well.

During the Stephen Curry phenomenon in 2014 and 2015, we saw Curry in many instances outselling LeBron and Kyrie just simply due to the socio-economic factors between the two regions. Cleveland ranks the second poorest city in America according to World Population Review. The Cavaliers will have 0 nationally televised games this upcoming season with just 4 on NBA TV. The Tyler Herro phenomenon of 2020 was in large part due to him being on the MIAMI Heat who were often on the national stage. For Garland, outside of local broadcasts the average fan will never see him play. We also haven’t gotten to the biggest elephant in the room being the actual roster. I am not sure if even the Cavaliers front office knows what to expect from this team. The Cavaliers seem to be playing NBA 2k myGM mode adding talent regardless of fit. The Cavaliers started the off season by drafting 7’0” Evan Mobley third overall in the draft. Mobley was the consensus pick despite many questioning if he and Allen could work in today’s fast paced NBA. Then the Cavaliers front office came in like the Kool-Aid man and signed Lauri Markkanen to a 4 year 67 million dollar deal. The Cavaliers have a big problem on their hands and I doubt it will get fixed anytime soon. Outside of not having an identity and a carousel of coaches. The Cavaliers have multiple players who think they are the best thing since sliced bread (alpha). The dysfunction from top to bottom as well as the teams market size, proves an uphill battle for any player let alone Garland.

Darius Garland entered the NBA after an injury riddled college career at Vanderbilt which limited him to just 5 games. Despite not having any major injuries in the NBA, the injury bug has followed him causing him to miss 17 games last season. Garland still improved noticeably in his second year with across the board improvements.

At 6’1 Garland is extremely undersized at the shooting guard position, despite that he still can score with ease. He uses his height and speed to his advantage with quick bursts of speed blowing by defenders. For a guard his size, he finishes excellent around the rim with a great deal of floaters and other acrobatic moves. Garland has excellent control over the ball, unlike smaller speedy guards in the past, he knows when to slow it down. Over 57% of Garland’s shots either come inside of 3 feet or behind the three point line. Garland is the typical 2021 guard where the mid range is relatively a non-factor despite shooting 40% from 10–16 feet last season. Now not everything can be unicorns and rainbows, the downside of Garland is that he is extremely inefficient. The league average player efficiency rating is 15, in Garland’s two seasons he has an average of 11.3. Much improved last year at 14.3, Garland is still below league average which is not promising in a young player but he’s young so he has room to grow. His true shooting percentage (54.7) puts him in the ranks of players like Ja Morant, Lamelo Ball, and Kyle Kuzma who have become a meme for their poor shooting. The real problem arises on the defensive side of the ball, Garland plays 0 defense. Garland has a negative defensive +/- which speaks for itself. As you can see below, advanced stats show Garland across the board even offensively is very underwhelming.

Despite that he will be just 22 years old as the season starts entering his third season just like Sexton a year ago. Similar to Sexton he has seen improvements to his game statistically every year, with Garland being the hottest prospect in the NBA leading up to the season. Are you a buyer or seller on the third year Cavaliers guard? This article is not to sway you one way or the other but rather to be a thought provoking piece, where you can draw your own conclusions before spending large sums of money on a player.