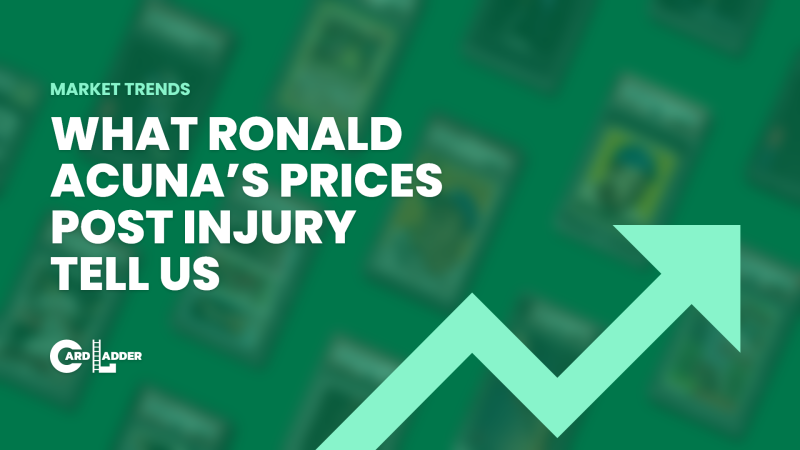 Since arriving to the pros in 2018, Ronald Acuna has become one of the new exciting young faces of the Major Leagues. At just 23 years old, he has already accomplished what many players dream of doing at least once in their careers. This in turn has made him one of if not the most heavily invested young stars in the sport. Unfortunately, Acuna suffered a completely torn ACL July 10th of this year.

The reason I bring this up is not to say injuries are a part of the sport and it’s always worth noting when investing but rather that his cards are seeing monthly percentage increases while being out… Forever the market trend of a player getting significantly hurt resulted in his prices dropping for obvious reasons. Most notably we saw Kevin Durant cards drop a notable amount immediately after his torn achilles in the 2019 Finals. With Acuna’s injury, one would assume that history would repeat itself and the cycle of players dropping in price while being out months to a year plus at a time.

Using Card Ladder’s player ladder with the monthly % changes, we can see that the majority of Acuna’s cards have seen increases in the last month. For cards in the Card Ladder database we can see 27 Acuna cards have increased in the last month. From looking at this data, you would assume that Acuna is playing at a high level with his prices increasing. With Acuna being a young superstar in baseball, it’s safe to assume a plethora of people viewed Acuna getting injured as a perfect time to buy. In such a competitive investment market, investors and even collectors made a run at Acuna after tearing his ACL on the assumption of the prices being cheaper. In turn all this did was raise Acuna’s prices with so many people competing for his cards at an assumed down market.

Could this be the case for all players moving forward? Possibly but I could easily see Acuna or players of his calibur being an exception to the rule. On the other hand with people investing a year in advance for many sports, this could very well be the new normal. As we saw in Football this year, despite the season starting in September the run up started in early 2021 while the prices dipped while the season was still going on in 2020.