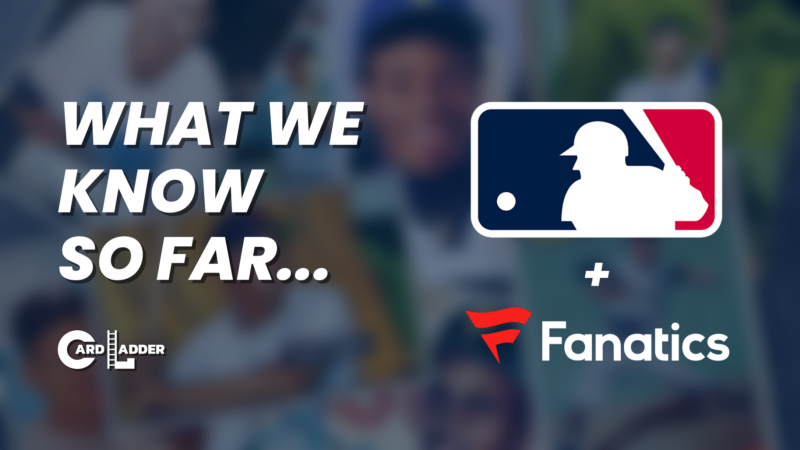 The last 24 hours have been absolutely insane for the hobby in more ways than one. Fanatics in the last 24 hours reached deals with the NBA and MLB to be the future of sports cards once the current deals end with Panini and Topps. The NFLPA has also signed a deal with Fanatics but the NFL itself has not. With many posting their hot takes, fear mongering, hypotheticals, misinformation and everything in between. What are the facts and what do we know so far? This article will be detailing what we know so far including a brief look at Fanatics and who’s leading the charge.

This allows Panini to use the names and likeness of players but does not allow them to use any of the logos or anything MLB licensed.

Topps deal with the MLBPA ends at the end of 2022, but their deal with the MLB does not end until 2025. This means you will still see Topps with the ability to produce baseball cards in Major League uniforms but not featuring any current players. Topps can go out and make deals with retired players for their rights, along with active players. Similar to what we see with Leaf, having Aaron Rodgers, Stephen Curry, and other stars cards. This will likely only be for a handful of notable players but not enough to make an entire product. As of how things stand now, the end of 2022 will be the end of Topps cards as we know them now with active players as the deal with the MLBPA switches to fanatics.

Josh Luber is a sneaker collector who turned his passion into a company many of us know as StockX. Luber worked for IBM when he founded Campless, a “sneakerhead data” company that tracked the secondary market for sneaker sales. Campless then morphed into StockX, which is an online marketplace for high-end product resale. Originally from Philadelphia, Luber is a graduate of Emory University, from which he holds a Bachelors, and MBA, and a law degree. Until mid-2019, Luber was the CEO of StockX. However, he stepped down from that role upon raising a Series C, $110 million round of venture capital funding at a $1 Billion valuation for the company.

Michael Rubin owns a majority share in Fanatics (72%), that name might also sound familiar as many know him as the Philadelphia 76ers owner. He also was one of the leaders in the movement to free Meek Mill from prison and is good friends with Patriots owner Robert Kraft. Although it is unclear on the prior relationship that Luber and Rubin have, they are both from the Philadelphia area and have a lot in common from their love of sports culture and even their faith.

Fanatics is an online retailer of sportswear, equipment, collectibles, and other merchandise. Card collectors and sports fans probably know them for their commercials and selling Fanatics exclusive sports card products. Most notably we saw, 2019 Panini Optic sets, 2020 Panini Phoenix Sets, Panini Prizm basketball blaster boxes with exclusive green ice parallels. Fanatics in 2019, purchased notable memorabilia company Steiner sports for less than 10 million dollars which included all of their inventory and exclusive deals with athletes. Since the acquisition, Fanatics has been signing more and more athletes to exclusive memorabilia deals including big names such as; Tom Brady, Jayson Tatum, Aaron Judge, Zion Williamson, Auston Matthews, and many many more. In 2015 and 2016, Fanatics reached long term deals with the NBA and NFL to operate NBAshop.com and NFLstore.com. Fanatics was also granted the rights for players merchandise by the NFLPA which helped them pass Nike as being the largest seller of player merchandise in 2017. A recent forecast by CNBC alluded to the company nearing 2.5 billion dollars in sales with the company valued at 18 billion.

Fake News being put out (Clarifications):