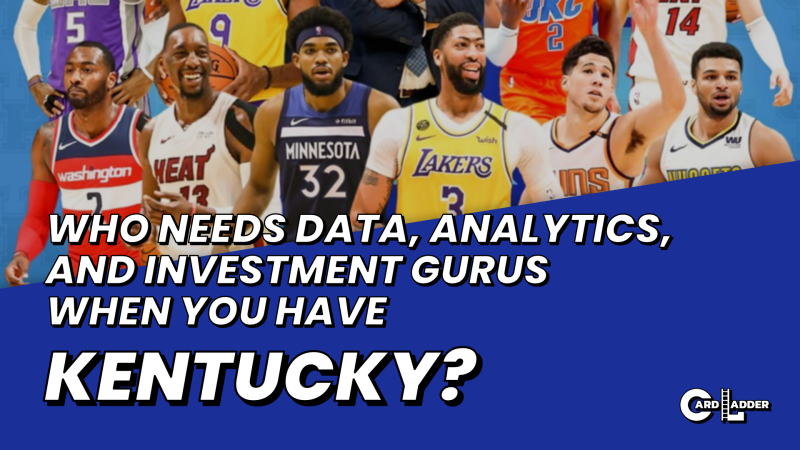 When it comes to investing, every person has their own method or reasoning to buy said player. Some investors have complicated formulas and advanced analytics while some might be as simple as an Instagram account posts. Whether you agree with each individual’s methods or not, at the end of the day everyone has the same goal to make money. Which in today’s crazy marketplace has some buying stickers, star players standing in the background, Justin Bieber cards, VHS tapes, just to include some of the many strange things people will buy to potentially be first to the punch to beat out the mob of other investors.

What if you did not need a fancy formula, analytics, statistics, or your favorite influencer to post about a player? What if you did not need to venture into niche non sports card markets to successfully invest? Over the last 10 years just buying cards from lottery picks who went to this school would have made you a very successful investor. That school would be the University of Kentucky, led by John Calipari who has produced NBA stars like no other over the last decade. With an investment success rate higher than some people who charge for their opinion. This article will take a look at John Calipari’s remarkable ability to produce NBA ready prospects over the last ten years.

Side Note: The chart above also solely focuses on lottery picks which excludes Keldon Johnson, Tyrese Maxey, and Immanuel Quickley who so far are three of the best players in their respective draft classes.

When we look at Kentucky’s ability to produce NBA talent, it’s rather astounding even compared to Duke or North Carolina. Duke since 2010 has only produced 4 all stars while North Carolina has yet to produce any. Looking at Kentucky’s 20 lottery picks over the last decade, 65% have made an all rookie team, 35% have become an all star, and possibly 50% assuming Jamal, Shai, and Fox make an appearance in their careers. One might think, well can’t this apply to other schools? The answer is simply no, Duke is the second largest producer of NBA players and they don’t even come close. Since 2010, Duke has produced 12 lottery picks with the overwhelming majority struggling. Top picks including; Marvin Bagley, Wendell Carter, Luke Kennard, Jahlil Okafor, Justise Winslow, Jabari Parker, and Austin Rivers. In the last 10 years, Kentucky has had 42 players drafted compared to Duke’s 28. This averages out to Kentucky producing 4.2 players per draft not including undrafted free agent signings later on. With 26 active players in the NBA, you can almost expect to find almost one Kentucky alumni per team which is unheard of.

As you can see above, using Card Ladder data research we can see the all time values of Kentucky lottery picks Prizm silver PSA 10. I felt this card was the most appropriate card to use as it’s the flagship basketball rookie that can help give you a general view of a players market. Unfortunately MKG, Nerlens Noel, and Trey Lyles aren’t in Card Ladder’s database but everyone else is. In addition, neither is Julius Randle’s silver Prizm PSA 10, so I am using a base instead.

How do they compare to the CL50 index?

One of the best ways to see how much the market has grown overtime is by looking at the CL50 index. To give some background on the CL50 index for those who might not know, the CL50 tracks the aggregate daily price movements of 50 high profile trading cards. The categories represented include basketball, football, baseball, hockey, golf, soccer, and gaming. The athletes represented span multiple generations, from the early 20th century to present. They were selected based on their cultural and historical influence on sports and the sports card hobby. The cards were selected based on their perceived status as iconic cards. The highest grade copy of each card was chosen, subject to the requirement that the particular grade must sell frequently enough that its short term market fluctuations are likely to be captured by its sales history.

The CL50 index first started tracking data in June of 2015 and since has risen an astounding 819%. While the 13 cards above in the same time period grew a whopping 634%. Although it is still a few hundred percent below, keep in mind the CL50 index is composed of some of the most iconic cards of all time. A 634% increase with 13 Prizm silver PSA 10 rookies selected solely on what school they went to is remarkable. In translation to dollars, if you put $10,000 in these thirteen cards since 2015 you would now have $73,400. Although it’s not turning $10,000 into a million like Tom Brady cards have done, keep in mind that these are just their Prizm silver PSA 10s. If you were to invest in Prizm numbered color, Flawless, or National Treasures you would have made well over 634%.

We’ve all had those head scratching moments when someone posts their investments on Instagram and you can’t help but think WTF! It’s hard to go on Instagram’s explore section nowadays and not see an influencer or content creator posting about this prospect or that prospect might be the next big thing. With everyone trying to be investment gurus, you have people investing in Myles Turney and Kevon Looney. Analytical charts that make Daryl Morey look like an amateur and not to mention people are willing to pay for investment advice from “experts”. Sometimes in life and especially in cards we tend to overthink things when the answers are right in front of us. Over the last 10 years the University of Kentucky has been nothing short of phenomenal when producing NBA talent.

Disclaimer: This is not promoting the investment in Kentucky players, simply we are looking at the history of their players and card values.