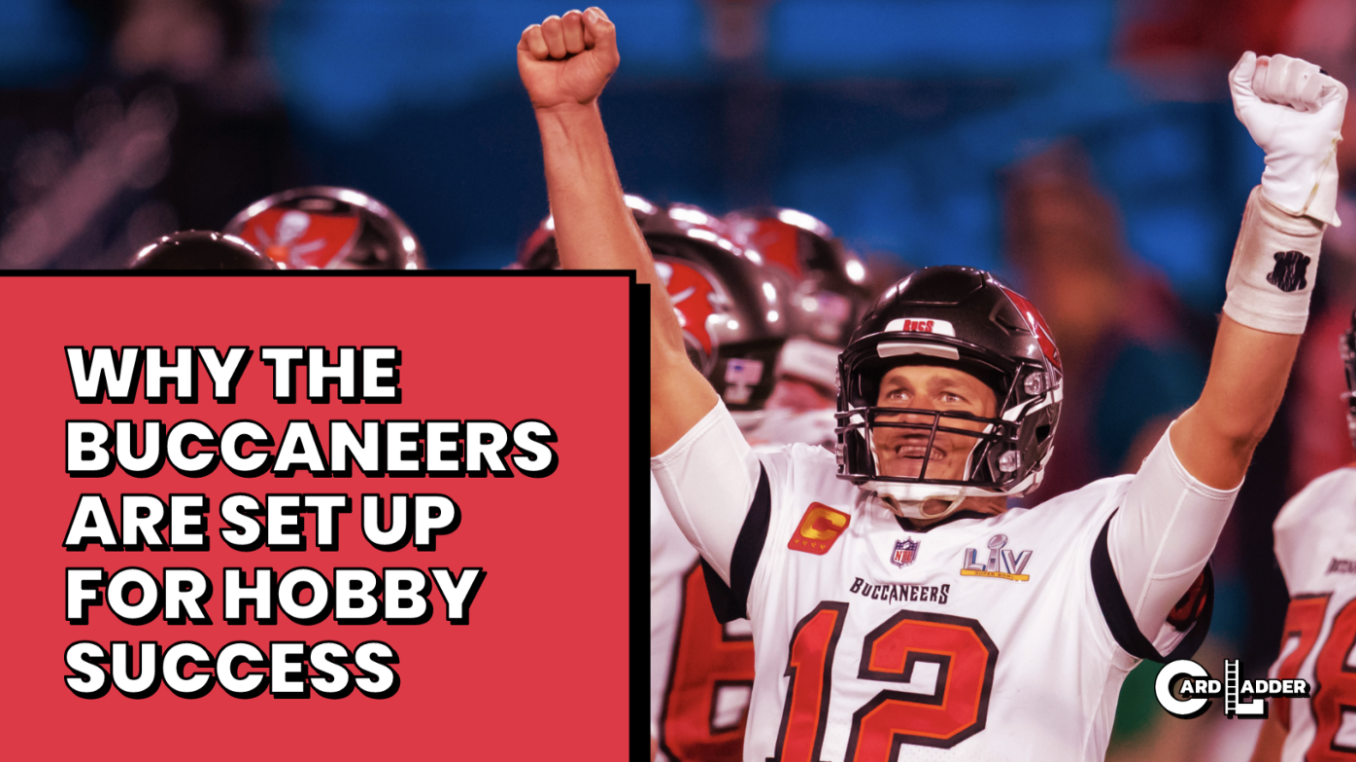 There’s a possibility that you are sick of hearing about Tom Brady’s card market… Which is understandable but what about his receivers sport card market? Playing alongside the unanimous G.O.A.T. likely comes with a lot of pressure, its very rare that NFL teams are Super Bowl or bust with anyone let alone a 44 year old. Let’s look at Tampas receiving core and see why they are set up for hobby success.

In the extremely reactionary sports card market, it is extremely important for people to be able to react. It is called primetime for a reason, in addition to being on national television in the prime time slot. It’s the only game being played at the moment and all eyes are on those two teams. With that being said, Tampa ties for the most primetime games with 5. One being played already vs Dallas which broke the record for most viewed season opener. Viewership and prime time games are everything in the extremely reactionary sports card market.

On paper the Buccaneers have an extremely talented backfield but on the field they seemingly cannot be consistent.

One of the greatest running backs in NCAA history, Fournette has had a shaky NFL career with highs and lows. Rushing for 1,000 yards twice but never over 1,100 his career has been riddled with injuries. Last season in Tampa he was a non factor during the regular season amassing just 367 yards. Lombardi Lenny became a postseason meme, icon, and beloved player by many fans but let’s not get ahead of ourselves. In four playoff games, he never had over 100 yards or multiple touchdowns. 300 yards and 4 touchdowns is impressive after his regular season but it’s yet to be seen if he can consistently produce in Tampa. Fournette’s inability to catch also does not help him either, differing snaps to newly acquired Giovanni Bernard.

The 2018 second round pick, had his best season by far last year but was nowhere to be seen in the postseason. Jones during the regular season was the workhorse back amassing 978 yards averaging 5.1 per attempt. Entering this season, it’s fairly clear the backfield will be a committee with Ronald and Leonard splitting touches then going with whoever has the hot hand. Similar to Leonard, Ronald struggles catching the ball which is a huge negative in a Brady run offense. Jones’ ability to hold onto the ball has also come into question. In 391 career rushing attempts, Ronald has 6 fumbles compared to Fournette’s 772 rushing attempts with just 3 fumbles and only 1 in the last 4 years.

No team in the NFL has the depth that the Tampa Bay Buccaneers, in addition to the literal G.O.A.T. throwing them the ball. Mike Evans, Chris Godwin, and Antonio Brown could easily be WR1 on the overwhelming majority of NFL teams. Typically three star wide receivers never work due to personality conflicts but there’s none of that with this core. All three wide receivers have different roles offensively and dominate what they specialize in. Mike Evans is a 6’5” possession receiver, Godwin is a 6’1” all around receiver who dominates in the slot, and Antonio Brown despite being 5’10” is one of the best receivers of the last decade with excellent footwork and route running. This is in addition to the greatest tight end of all time in Rob Gronkowski and former top pick OJ Howard returning from injury. Last season, Tom Brady had the second most passing attempts and ranked third in yards per game. When you are passing at this high of a volume, someone has to be catching it. Despite winning the Super Bowl last season, this is the first season with the Buccaneers receiving core that is active and healthy. Last season Godwin missed 3 of the first 5 games with an injury, Antonio Brown was a midseason acquisition and only started 4 games, in addition to Gronkowski taking weeks to get back into playing shape. Bruce Arians has established himself as an offensive mastermind turning Carson Palmer into an MVP candidate while Jameis Winston led the league in yards. With the talent that Tampa has in addition to their high volume pass first offense, expect the receivers to benefit greatly.

4. TOM BRADY IS THROWING IT TO THEM!

With Tom Brady being the hottest commodity in sports cards, one would assume that the people catching his passes would also see an increase in prices. All eyes are on Brady this season and will continue to be on him, as he is one of the most polarizing athletes in the world. What he is doing at 44 years old is unheard of and as of late Brady seems to become a beloved figure once departing New England. Football is a team sport and unlike basketball you cannot put a YMCA team with LeBron James and expect to make the finals. Tom Brady’s success is ultimately partially reliant upon his wide receivers making plays. After Antonio Brown’s stellar week one, he saw a 5.79% price increase with a monthly change of 14.72%. I expect this market trend to translate for all the Tampa receivers as the season progresses.