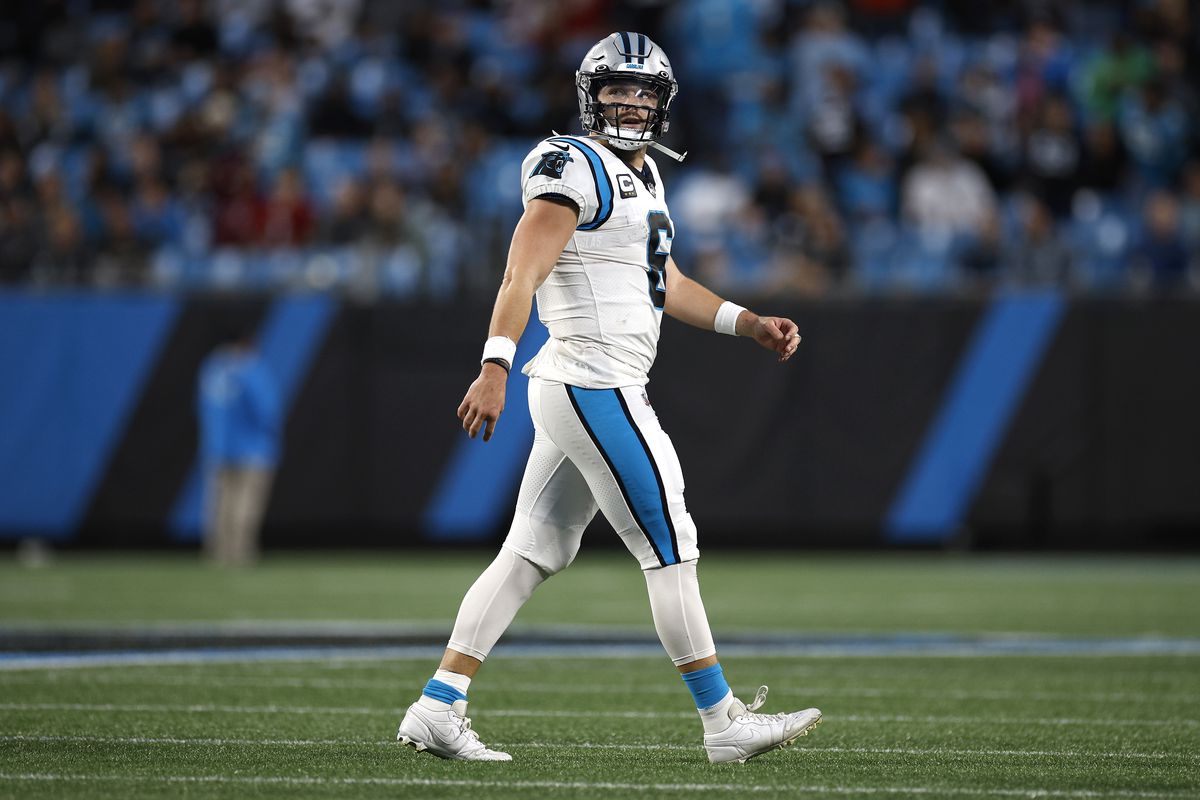 Baker Mayfield... Where do you start with him? A career so young yet so difficult to find a place to start. Your grandmother who doesn't watch football might know him from Progressive or other television commercials. Your uncle who refuses to watch the NFL because "the NCAA is a superior product" remembers Baker as the heisman winning quarterback at Oklahoma. If you are reading this you likely know Baker as the 2018 #1 overall pick who is playing his way out of the league.

A dominant college career finished with a heisman cherry on top had him as the consensus number one overall pick to the Browns. Many questioned Baker's maturity as he was arrested for resisting arrest and fleeing a police officer while intoxicated in public. Many other small instances of immaturity compiled into something definitely worth noting. Planting an Oklahoma flag at midfield over the Ohio State logo, not good optics as it is but for Baker it just made it worse. This was followed by grabbing his crotch and cursing out Kansas players. These small things compiled into many red flags, the likes of Colin Cowherd frequently called out.

Mayfields rookie season would arguably become his best statistical season to date, throwing for a career high in touchdowns. While he did not throw for his high number of yards, in 14 starts it was just 150 yards shy of his high in 16 games. While his rookie season numbers might not blow you away and they definitely are not Herbert, you must remember the recent history of the Browns. Baker ultimately went 7-7 as a starter as a rookie which is equivalent for 16-0 for any semi-competent franchise. In the three years prior to Baker joining they won 4 games of a possible 48... In the decade prior the Browns only had one season with 6 plus wins and that came in 2014 with 7 wins.

The resemblance of a competent quarterback in Cleveland was the equivalent of hitting the lottery. Baker was in such good favor with the city, they retired the infamous Browns jersey with the history of starting quarterbacks since 1999.

2019 was a step back for Baker and a treading water year for the Browns as they just lost 1 less game but Baker was noticeably worse. His completion percentage was down 4%, 5 less touchdowns, 7 more interceptions, and his rating was down 14 points despite starting two more games. Throughout all this, it is important to remember the Browns history before Baker. A six win season was a six win improvement over just two years prior. The 2020 season would not become a quarterback controvery but rather another opportunity for him to take the next step.

The Browns loaded roster headed into 2020 with supreme confidence with notable players including; Nick Chubb, Kareem Hunt, Jarvis Landry, Myles Garrett, and Denzel Ward. Weeks two to five the Browns were hot in large part to Baker's excellent play. While his passing yards left were lack luster, they were putting up points so it did not matter much. Bakers 3500 yard and 26 touchdown season was acceptable because he was winning in Cleveland, something that had not been done since 2002. He was also efficient with 62.76% completion percentage and a 96 passer rating.

The Browns making the playoffs was a miracle in and of itself but could they win a playoff game? Brown head coach Kevin Stefansky caught covid in a shocking turn of events and would miss the game. Heading into division rival Pittsburgh, who had  a 26-5-1 record over the prior 15 years vs the Browns. It was an uphill battle with Pittsburgh as -5.5 favorites. Baker Mayfield balled out and flat out embarrassed the Steelers with a dominant 3 touchdown game. Heading into Kansas City for the divisional game no one really gave them a shot to win. Mayfield did not play great but he also was not bad. They came 1 Chad Henne rush from making it to the AFC championship game. Ultimately this season would leave Browns fans in tears of joy, after decades of misery Browns fans thought they finally had a franchise quarterback.

As strange as this might have sounded to someone from 2002-2019 but the Browns actually had expectations... By the looks of it the Browns were a great team on paper and on the field a year prior. An elite defense with the former #1 overall pick coming off a great season with a great supporting cast in; Nick Chubb, Kareem Hunt, Odell Beckham, Jarvis Landry, and David Njoku.

Starting in 14 games, the same number of starts as his rookie season. His season resembled  2018 and 2019 a lot more than the 2020 season. At this point it had been four years of Baker and despite one great season it was time to move on. He ranked last in passing yards of all quarterbacks to start 14+ games, and bottom 4 in all other major statistics. Rookie quarterbacks to the likes of Zach Wilson and Trevor Lawrence had comparable numbers which is not acceptable as a fourth year starter. Tensions between Baker and the coaching staff were apparent as well as the players and front office. His play got so bad, Odell Beckham's father took to social media to let out his frustrations...

Often times in life, we gloss over the fact that two things can be true at once. One being Baker needed a change of scenery and the Browns needed a new quarterback. At the time this was not an indictment on either party in a negative light but it was just reality. Browns would ultimately acquireee Deshaun Watson and Jacoby Brissett while the Panthers would trade for Baker Mayfield. A talented offense with DJ Moore, Robby Anderson, and of course Christian McCaffrey, Baker once more had a plethora of weapons. With the Panthers slated to play the Browns week one at home, Baker spent much of his off season taking shots at Cleveland. In anticipation for week 1, he launched some merchandise with an interesting shirt...

A shirt depicting a broken dog collar with big words across the chest "Baker Mayfield off the leash" was a clear shot at the Browns organization. There was no need to read between the lines with this one, as he literally put Carolina vs Cleveland next to his face. With Baker heading into week 1 with all the confidence in the world at home, facing a Browns team with a backup quarterback. This was the week to show the world, 2020 was not a fluke and he is back!

(Week 1) Well the Panthers lost that game and it was flat out embarrassing for Baker Mayfield who had a bad game. Just 59% completion, 235 yards, 1 touchdown, 1 inerception, and 4 fumbles. For someone who released week 1 shirts mocking his former team, you'd think he would have played good. Not only did he not play good but they lost to the Browns backup quarterback.

Week 2 was not any better as he had just a 48% completion percentage, 145 yards, 1 touchdown, and a 74 passer rating. This came against a Giants team who the next week allowed 23 points to Cooper Rush's Cowboys.

Week 3 was a much better week for the Panthers as a team but not for Mayfield. On the opening drive the Panthers defense returned a kick 44 yards putting them up 7-0. The defense was phenomenal, picking off Winston twice and causing two forced fumbles. Despite all this, Baker still had just a 48% completion percentage and 170 yards with one touchdown. Bakers one touchdown pass came on a Leviska Shenault screen pass, which went the distance for 67 yards. Considering Baker had just 170 yards passing and 67 of those came on a pass behind the line of scrimmage... Panthers fans patience started to grow thin with Mayfield despite the team win.

Week 4 similar to week 3 started off strong with another Panthers defensive touchdown, this time picking off Kyler Murray with a 33 yard return. Outside of this touchdown, the Panthers would not score another until 4 minutes left in the fourth down 26-10. The game was out of reach at this point and the only thing the touchdown helped was McCaffrey fantasy owners and Baker's stat line. With a much improved completion percentage of 61%, it is still far below ideal for a starting NFL quarterback. A completion percentage of 61% would still put him in the bottom 5 for reference. For the third week in a row he did not break 200 passing yards. Mayfield also turned the ball over 3 times throwing 2 interceptions and losing 1 fumble.

All while this has been going on in Carolina, the Browns seem to be a much improved team under the leadership of Jacoby Brissett.

While Sam Darnold is out with an ankle injury, it is likely at some point this year sooner rather than later he will play. After four weeks, it is safe to assume nothing will change especially with the next three opponents being Rams, 49ers, and Buccaneers. With Baker ranking bottom 5 in practically every passing category its safe to assume, Darnold could not be worse and worth trotting out there.

While there has only been one public Baker six figure sale, the title of the article metaphorical. Baker Mayfield will likely be the first #1 pick who plays himself out of the league in the post sports card boom era. While many players such as Drew Lock, Daniel Jones, and Mitchell Trubisky might not have lived up to expectations. The hype for those guys were never to the level of Baker, from level of play to endorsement deals. During Bakers 2020 run, he was arguably the face of young quarterbacks in the NFL next to Mahomes. It was hard to watch a football game without seeing Baker during a commercial break.

Does He Have A Place/Future In This League?

While this question might seem like a no brainer, it is way more complex than that.     Baker Mayfield no doubt about it has the talent of a backup quarterback and would likely be in the top tier of backup quarterbacks. The harsh reality of life as a backup quarterback is, the team would prefer if the media did not know your name. They want you to understand your role and be ready to step in god forbid QB1 goes down. The last thing the team wants is a quarterback controversy and or media conflict.

There are plently of examples of talented quarterbacks who just simply do not meet the talent to media circus ratio. We are currently seeing Cam Newton in this situation who is obviously a top 60 quarterback but the name Cam Newton has a lot of hold over the media. Teams would deem the clothing he wears a distraction in and of itself. Other example of this include; Johnny Manziel, Tim Tebow, and Colin Kaepernick.

Along the way Mayfield has made a plethora of enemies in the media, most notably Colin Cowherd. Nothing good is going to come from not being on good terms with the media. He has also become a meme with fans proclaiming he spent to much time filming commercials opposed to practicing. Baker finds himself just five years removed from being the number one overall pick. Making many enemies and burning a plethora of bridges along the way, there is a very real possibility he isn't in the league come next year.